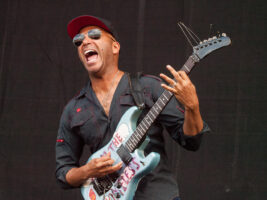 Tom Morello used to “disavow” Hendrix due to racist comments: “I had to distance myself from that to be the guitarist I wanted to be”

Tom Morello has recalled a time when he would “publicly disavow” Jimi Hendrix due to racist comments that audiences used to sling at him.

Speaking to NME, Morello looked back on his experiences with racism, which happened during the early days of his guitar-playing career.
“I used to publicly disavow Jimi Hendrix because every single gig I played as a young man, someone in the audience would yell ‘Play Foxy Lady!’ or ‘Play with your teeth’. That was the assumption because there was only one signpost for what a Black guitar player could be.
“I had to distance myself from that to be the guitarist I wanted to be. Thankfully, that’s no longer the case.”
Morello added that, while he was in school in Illinois, he was the only Black student in his class, and joked that he “miraculously changed colour” when Rage Against The Machine began receiving significant airtime on rock radio stations that predominantly showcase white artists.
“There’s a large subset of the audience that is shocked and upset when they hear me talk about self-identifying as Black,” said Morello. “They’re one step short of offended but I’m Kenyan, dude. I’m straight-up, Africa Black.
“It’s not always a malicious prejudice but there is that ingrained prejudice in the DNA of rock, despite the fact it was invented by Black people.”
Tom Morello’s upcoming solo album, The Atlas Underground Fire, is due out on 15 October and will be a star-studded affair. Guests on the album include the likes of Bruce Springsteen, Eddie Vedder and Damian Marley.
Last week, the guitarist supplied fans with the single Let’s Get The Party Started, a collaboration with Bring Me The Horizon.
Rehearsals for Rage Against The Machine’s reunion tour next year are also set to begin in January 2021. Morello told NME that the band have no plans just yet to write new material.
The post Tom Morello used to “disavow” Hendrix due to racist comments: “I had to distance myself from that to be the guitarist I wanted to be” appeared first on Guitar.com | All Things Guitar.