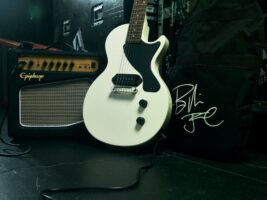 The striking instrument features a mahogany body and neck, as well as an Indian laurel fingerboard with 22 medium jumbo frets. Meanwhile, a black pickguard presents a stark contrast to the Classic White gloss finish.
And there are signature appointments to the package: Billie Joe’s autographed on the back of the headstock and a leopard faux fur-lined custom hardshell case to boot.
The guitar keeps things simple in the electronics department, with a single PRO P-90 pickup in the bridge position and tone and volume controls – with CTS pots – to shape its sound.
Epiphone has also prepared a more rudimentary version of the instrument – with a bolt-on neck and no signature – for a beginner-focused Player Pack. It comes with a two-channel Epiphone 15G amplifier, an Epiphone guitar strap, cable, clip-on tuner and three picks.
Aljon Go, Product Manager at Epiphone, said that working with Armstrong over the years has been “an absolute honour” for his team.
“The new Epiphone Billie Joe Armstrong signature guitars will help inspire a whole new generation of guitarists with an accessible, quality instrument to blaze their path in making music, just as Billie has throughout his Grammy Award-winning career,” Go said in a statement.