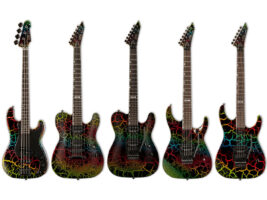 ESP revives the Rainbow Crackle finish for the LTD ’87 Series

ESP has expanded its LTD ’87 range with a new eye-catching Rainbow Crackle finish. The ‘87 range recreates the first series of instruments ESP introduced in the mid-1980s.
READ MORE:
With the new Rainbow Finish the range has gotten a little more faithful as ESP CEO Matt Masciandaro explains. “The original Rainbow Crackle finish was offered in ESP’s 1987 catalogue.
“Those guitars and basses had a distinct ‘80s hard rock and metal look, and have since become coveted due to their relative rarity. We’re happy to expand the ’87 Series by bringing back the Rainbow Crackle finish on these excellent reproductions.”
Eclipse ’87 NT and Eclipse ’87

This hot-rodded T-type features neck-through construction, a Macassar ebony fretboard, a mahogany body and a three-piece maple neck at a 24.75-inch scale. Pickups include a Seymour Duncan ’59 in the neck, and a Seymour Duncan JB in the bridge. Both of these can be split by pulling the tone knob.

The Mirage Deluxe ‘87 features a 25.5-inch scale, a bolt-on maple neck, a Macassar ebony fretboard and an alder body. Electronics include a Seymour Duncan Hot Rail in the neck and a Seymour Duncan Distortion in the bridge, Both of which can be split with by pulling the tone knob.
M-1 Custom ’87

Rather than a bolt-on, the M-1 Custom ‘87 has neck-through construction with a three-piece maple neck, an alder body and a Macassar ebony fretboard. The electronics layout is also more stripped back, with only a Seymour Duncan Distortion in the bridge, which can be split with the tone knob.
Surveyor ’87

This P-style bass has a Seymour Duncan Vintage P in the middle position and a Seymour Duncan Vintage Jazz in the bridge, with an alder body and a bolt-on maple neck and a Macassar ebony fretboard.
Controls consist of a volume and tone, as well as a balance pot to blend the pickups.
The post ESP revives the Rainbow Crackle finish for the LTD ’87 Series appeared first on Guitar.com | All Things Guitar.