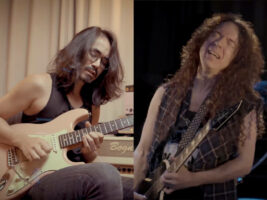 Footage from Martin Friedman’s April show in Japan, with Mateus Asato joining the set remotely, has made its way online. You can watch it below.

The show, held in Osaka, was part of a concert series to celebrate the launch of Friedman’s latest album Tokyo Jukebox 3.
During the set, the two guitar virtuosos jammed over an instrumental version of the Crowded House classic Don’t Dream It’s Over, with soaring harmonised leads aplenty – take a listen here:

Asato, who rose to prominence sharing videos of his playing to Instagram, announced back in March he was taking a break from the platform. At the time he deactivated his account, he had amassed over a million followers.
“I was mainly oversaturated from the pressure of posting things on social media,” he told Guitar.com in an interview. “I started to [pay] more attention to my mental health and other details – and I had no clue how many things I wasn’t handling properly.”
“It’s been a great recovery process so far – and I feel like my creativity is getting better gradually during this time.”
In March, Friedman praised the new generation of internet-savvy guitarists, listing Asato and Ichika Nito as players that stand out to him.
“[Mateus is] from Brazil and he’s just a beautiful guitarist,” Friedman told Ultimate Guitar. “There’s another guy called Ichika from Japan and although his style is so completely different from mine – so much so, that I doubt I could even pick anything up from it, I just like the way he plays. I enjoy it.”
The post Watch: Mateus Asato joins Marty Friedman on instrumental version of Don’t Dream It’s Over appeared first on Guitar.com | All Things Guitar.