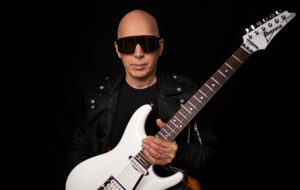 “Every guitar sound is my guitar, DI with the SansAmp plugin; it’s blown my mind:” Joe Satriani on new album The Elephants of Mars

With 15 studio albums spanning a career of almost 40 years, it’s fair to say that we know what to expect from a Joe Satriani album. Memorable melodies and steadfast rock grooves are the order of the day – and that’s exactly how new album The Elephants of Mars begins, with the catchy Sahara. But from there, the record takes an abrupt left turn, with hooky major melodies disappearing in the rear-view mirror.

Elephants is without doubt one of the most interesting Satriani records to date. With the usual two-year release and touring cycle practically eliminated during the US’s multiple lockdowns and global logistics issues, Satriani found himself without a deadline and without a cost-sensitive studio recording session, which gave him the freedom to push himself. The resulting record is dark and jazzy, with elements of fusion and shred.

At a time when many young YouTube guitarists can make a mockery of the standards once considered ‘virtuoso’, the prowess showcased by Satch on this album is enough to remind you that we should still be paying tribute to the Godfather. It’s also heart-warming for older players too, for it’s an acknowledged truism that artists rarely get better with age. But, at 65, Satriani has long pushed the boundaries of what we expect from guitar instrumental music, even at a time when instrumental bands are continuing to reshape its landscape.
If the lack of deadlines and touring cycles are responsible for this, then long may they continue. Here, we speak to Satriani about his new record, his high-school guitar teacher, and the prospect of going all-digital.

Do you concern yourself with gear at all?
A lot of gear is for the player, you know? Take someone like Joe Bonamassa; he’s got every great guitar ever and he’s a phenomenal musician. So what really matters is that when we go to see Joe play, we want him to be happy, because if he’s happy he’ll play his best for us. Same thing when you go see Steve Vai and he’s playing the same guitar; we want him to be happy because then he gives us the best version of Steve.
Once you get to the point where you have a lot of instruments and amps, you realise it’s about making yourself happy enough to deliver performances every night, because the name, the label or the vintage quality of it, it really doesn’t translate into the hearts and ears of the audience. It’s really just a little mind game you’re playing with yourself.
Satch’s The Elephant Of Mars is out now.
The post “Every guitar sound is my guitar, DI with the SansAmp plugin; it’s blown my mind:” Joe Satriani on new album The Elephants of Mars appeared first on Guitar.com | All Things Guitar.