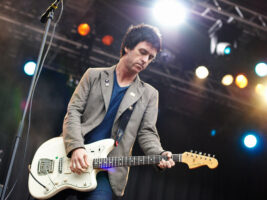 While solid-state amplifiers traditionally earned a reputation as being of lesser sonic quality than their tube-powered bretheren (something that the advent of high-end digital modelling has put to bed for the most part) plenty of recording artists have turned to the durability and consistency of the transistor to provide their tones, both live and on record.

READ MORE: The best stocking stuffers for guitarists in 2021

As with anything else in guitardom, tone is a very subjective concept, and not everyone is as bewitched by the sound of cooking glass as others – indeed, some would argue that certain solid-state amps offer tones that tube amps simply can’t. Below we’ll check out eight notable solid-state amps, and the guitarists who used them.
James Hetfield, Adam Jones, Kirk Hammett, Johnny Marr, etc, etc… – Roland JC-120
Image: Pete Cronin / Getty
Perhaps the most iconic solid-state amp of all Roland Jazz Chorus JC-120has been used on countless albums by almost as many notable guitarists over the years, and is rightly revered and still highly sought-after today for its massive amount of headroom and pristine clean sounds. The amp has also been famously used by artists who are better known for their distorted sounds. James Hetfield of Metallica started incorporating the JC-120 into Metallica’s sound around the time they were recording …And Justice For All. It was also used by Paul Landers of Rammstein and Wes Borland of Limp Bizkit. Adam Jones from Tool also used it as a canvas for his more effect-driven tracks on the 10,000 Days album. Jones  is something of a solid-state aficionado, also using a Sunn Beta Lead on Lateralus.
Dimebag Darrell – Randall: RG100, Century 200, and Warhead
Image: Martyn Goodacre / Getty Images
Dimebag was a hugely influential figure in popularising the use of solid-state amps in metal. He used a Randall RG100 for the recording of Cowboys From Hell and The Great Southern Trendkill, then moved on to Randall Century 200 heads for Vulgar Display of Power and Far Beyond Driven. Later on, he got his own signature amplifier from Randall – the Warhead, which was released in 2000. Presumably, this was used on the last Pantera album – Reinventing The Steel.
In 2009 after his passing, a line of amps was created called Dime Amplification. The resulting amp line consisted of a 100-watt head called the D100, and a 20-watt practice amp called The Blacktooth. The amps were the result of the collaborative effort between former Randall designer, Gary Sunda, Elliott Rubinsun of Dean Guitars, and Dime’s longtime guitar tech, Grady Champion.
John Fogerty  – Kustom K200A-4
John Fogerty. Image: Tim Mosenfelder / WireImage
In the days of Creedence Clearwater Revival, John Fogerty was known to use a Kustom K200A-4 for many of his hit recordings with the band such as Green River. This was touted as a 200-watt model which was somewhat deceiving as solid-state amps were often advertised using their peak power rather than RMS power back in the late 60s. Kustom also made great custom P.A.s which were used by artists like Johnny Cash, Waylon Jennings, Sheryl Crow, The Jackson 5, and Carl Perkins.
Wayne Static, Bully Gibbons – Marshall Valvestate & MG Series
Photo: Harry Durrant / Getty
The late Static-X guitarist made some waves when he identified the MG100 HDFX as the source of his tone, the shocking factor being that the MG series is Marshall’s cheap introductory line of solid-state amps and was never meant to be a “professional” amplifier. It wasn’t a one-off either – according to a recent interview with producer Ulrich Wild, Wayne used a Valvestate 8100 that Ulrich had in the studio for the recording of the band’s seminal Wisconsin Death Trip. Apparently Wayne felt that the solid-state amps gave a tightness on the low end which lent itself the machine-like, “evil disco” sound they were cultivating.
While some embraced the machine-like “digital” sound, on the other end of the sonic spectrum, Billy Gibbons has been known to put some solid state Valvestate 8008 Marshall amps to work in his live rig (with JMP-1 preamps in front of them) and in the studio.
Dave Mustaine – Line 6 Prototype
It might never have gone into production, but at one point Megadave was so taken with Line 6’s solid-state amps that the company created a prototype for him to use as a potential signature model. The amp the same power amp section as the HD147 and had four amp modes – a standard Line 6 clean, a Dave Mustaine signature heavy tone (modeled after his Marshalls), a modified vision of the Dave signature heavy tone, and a Plexi tone.
This amp was said to be used extensively by Dave during the recording of Megadeth’s tenth studio album The System has Failed, which debuted at #18 on U.S. Billboard charts. In the following video, Dave claims the amp sounded better than the Marshall tube amps he had been using.

Mustaine also had a solid-state signature 15-watt Marshall MG Series Micro-Stack that’s never been used was never used on any recordings to our knowledge.
Yngwie Malmsteen – Fender RocPro1000
The Fender RocPro1000 was a hybrid amp… which means, in this case, the clean channel is solid state, while the overdrive is powered by a single 12AX7 preamp tube. None other than Yngwie J Malmsteen did use this amp for some of the performances he did with symphonies and in some of his early instructional videos. Yngwie doesn’t like to talk about the RocPro much since the release of his own signature Marshall heads, but these amps have great tonal characteristics though they are incredibly loud. You can find them extremely cheap – often people will neglect to change the tube and the amp will not sound very good, so they sell it cheap. Look around and you can replace the tube and have a great sounding amp for the price of a night out at the pub.
BB King, Alan Holdsworth, Ronny Montrose & others – Lab Series L5
Image: Michael Ochs Archives / Getty
Gibson’s Norlin Era is often touted as either a period of horribly misguided ideas or as a time of immense creativity for the company. The difference between the two lies in one’s perception of the gear that came out of that era. While most of the focus was on the brave new designs being churned out from the Gibson factory, Gibson was branching out with new offerings in their far too often-forgotten lineup of amplifiers as well.
One of the benefits of being overtaken by a giant conglomerate corporation like Norlin like is that you sometimes get to reap the benefits of cross-pollination between companies under that corporate umbrella. Such was the case with the Lab Series Amplifiers which were distributed by Gibson during the Norlin years, but designed by Moog, another company owned by Norlin Industries Inc. Technically Lab Series is its own brand, but they are often marketed as Gibson Lab Series amps. Moog lent some of their great technological know-how into the design of Lab Series Amps and the result was a line of high-quality solid-state amps that had built in spring reverb and compressor/limiters. The series offered five guitar amps [L3, L5, L7, L9, L11] and three bass amps [L2, L4, L6]. The L5 was the best-selling amp in the series – it was a 100-watt 2×12 combo amp. They featured very solid construction – anyone who has handled one will tell you, they’re heavy!
The L5 was used and endorsed by tone-gods such as BB King, Alan Holdsworth and Ronnie Montrose. Ty Tabor of Kings X has referred to this amp as his “secret weapon” in a 1996 interview, laying to rest a lot of speculation about the gear he used on the first four Kings X records. Some have speculated that Eddie Van Halen used an L5 for the recording of the solo on Beat It. Others claim he used another solid-state amp, a modified Hartley Thompson, that he borrowed from Alan Holdsworth and was confirmed to have had in his studio at the time of the recording.
David Gilmour, Buckethead, Jeff Beck & others – The Rockman
Image: Larry Hulst / Michael Ochs Archives / Getty Images
The Rockman was a cool little headphone amp designed by Tom Scholz [of Boston] that wound up being used on a lot of records – Def Leppard used in on Hysteria, David Gilmour also used one on his solo album, About Face, the Meat Puppets used one on Up On The Sun, KISS used one on Animalize and it was rumored to have been used by Jeff Beck and Buckethead in the studio as well. It hit the market in 1982 and had a very distinct sound that was often used to add contrast to the powerful overdriven sounds that dominated the airwaves of the 1980s.
For more guides, click here.
The post Famous guitarists who used solid state amps appeared first on Guitar.com | All Things Guitar.