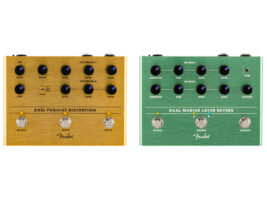 Fender has released a veritable boatload of new gear for the summer of 2021, among which are two new guitar pedals. Both are updated, doubled-up versions of previously existing pedals: the Pugilist distortion and the Marine Layer reverb.

Appropriately swapping out Dual for Duel here is the Duel Pugilist, a punchy double distortion pedal that features the same distortion voicings found in the original, but with new combination modes. It has three: Series, Mute and Parallel. Series mode stacks the two distortions as you would with two separate pedals, while Parallel mode allows for the blending of two different distortion sounds, or a clean sound with a distorted sound. Mute mode offers the ability to use one distortion to create your main tone and then layer the second distortion on top.
The pedal also adds a two-band master shelving EQ, to tame flubbing bass or shrill highs.
Lists for $229.99 / £179.99 / €199.99.
Dual Marine Layer Reverb