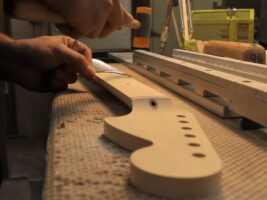 Fender’s factory in Ensenada, Mexico has reportedly been hit by a fire.
According to Ensenada.net, the fire broke out in one of the warehouses early in the morning of 16 February.
The fire led to employees being evacuated before fire engines arrived to combat the blaze.
There were reportedly fears that the fire would spread to nearby facilities in the area. Alongside firefighters, a fire suppression system on the second floor of the warehouse hindered the fire’s spread enough to stop it doing so.
Ensenada.net reports that the fire was extinguished within a few minutes, however, the extent of the damage to equipment and materials is not known. No injuries have been reported.
Fender has not made an official announcement regarding the incident at present.
The factory creates all of Fender’s mid-priced Made In Mexico guitars. Recently, it was announced that it would be being expanded to accommodate the manufacture of the new Acoustasonic Player Telecaster.
“The expansion of the Ensenada factory has been a 26-month long journey but one that’s been completely necessary to make Acoustasonic technology available to a widespread audience of players around the world,” said Ed Magee, Fender’s executive vice-president of operations
“We have an incredible depth of engineering, operations and guitar building experience in Ensenada and this investment gave the team an opportunity to tackle a brand-new guitar manufacturing process to meet the growing creative needs of our players.”
This is a developing story.
The post Fender’s Ensenada factory hit by fire appeared first on Guitar.com | All Things Guitar.