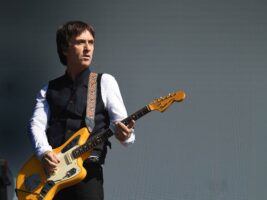 The guitar, which was first teased on Marr’s Instagram account in May, has similar features to the Olympic White and Metallic KO iterations already available.
Based on Marr’s beloved 1965 Jaguar, it boasts a maple neck with a custom profile and a 7.25” radius rosewood fingerboard, 22 vintage-style frets, an alder body and a 24” scale length – akin to some Mustangs. The guitar’s bridge – equipped with Mustang saddles – ensures greater tuning stability and easier intonation adjustments.
Credits: Fender
In terms of electronics, the axe comes loaded with a pair of custom-wound Bare Knuckle single-coils, which are controlled with master volume and tone controls, alongside a four-way pickup selector switch and two switches on its upper-horn in place of the traditional rhythm circuit controls: a universal high-pass filter and a bright switch specifically for position four on the pickup selector, which Marr claims “slims out” the sound.
The defining update of the guitar is undoubtedly its vivid Fever Dream Yellow nitrocellulose lacquer finish, which Marr named after his latest album, Fever Dream Pts 1-4, released in February 2022.
The guitar also comes in a fancy blue-lined Fender hard case, along with a certificate of authenticity and a strap.
Marr has been seen road testing prototypes of the Fever Dream Yellow Jaguar on tour – this time, with Blondie – as he has done with previous iterations of his signature axe. This version of Johnny Marr’s signature guitar follows a limited run of the model in Sherwood Green, from 2014.
More information about existing versions of the Johnny Marr signature Jaguar can be found on Fender’s official website.
The post Fender’s Johnny Marr Jaguar now comes in a limited-run Fever Dream Yellow appeared first on Guitar.com | All Things Guitar.