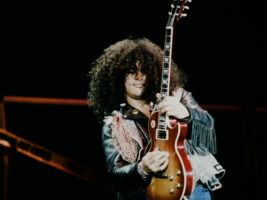 Few guitarists have more signature gear in the world than Saul Hudson, but while the route to nailing Slash’s tone might seem simple (signature Gibson Les Paul into signature Marshall amp with a few of his signature pedals thrown in) but the reality is a lot more complex.

From rented amps to dubiously authentic instruments, there’s a huge amount of debate, conjecture and straight-up myth surrounding Slash’s hugely influential tone and the gear he used to create it. Let’s set the record straight…
Slash is playing a Gibson Les Paul on Appetite For Destruction

Image: Phillip Faraone / Getty Images
When recording Use Your Illusion, Slash wanted to emulate the musical feedback he’d become adept at using on stage, but it proved tricky to consistently reproduce in a studio environment. To make life easier for everyone, Slash’s tech at the time, Adam Day, created a ‘feedback circuit’ that he could switch in as needed, but there’s a lot of debate about what this actually entailed.
Thankfully, in 1991 Adam spoke to Guitar Player at the time and revealed that the circuit consisted of a splitter box that ran into a mic’d Marshall half-stack in the studio on one side, with a volume-pedal controlled Mesa/Boogie Mk III on the other side.
There has been a lot of debate over Slash’s setup, specifically the feedback circuit, that was used in the studio during the recording of Use Your Illusion. A diagram appeared in the December 1991 issue of Guitar Player Magazine should clear things up.
“I picked the Mesa/Boogie Mark Ill because it had the most gain and distortion,” Adam explained. “It developed feedback the quickest and at the right frequency; this goes right back to the pickups and out to the Marshall. The Boogie wasn’t on all the time: when Slash wanted to have it in, I’d press the volume pedal down and he’d start getting feedback, The rest or the track was so loud in the monitors that the feedback wasn’t too distracting.”
You can hear the Feedback Generator in action at the beginning of You Could Be Mine and throughout Use Your Illusion.

You can ‘get’ Slash’s tone with the right gear
Slash’s rig has evolved over the years but no matter what he’s playing, it always sounds like him. It’s easy to get into the weeds with this stuff and to obsess over minutiae but ultimately Slash has that rare talent that so many of the greats have – of playing in a way that is instantly identifiable, regardless of the gear used. The common denominator is always him
“Slash has worked with several techs and many producers over the years. The way we did stuff evolved while I was his main guy, and Slash’s rig evolves to this day,” says Slash’s tech Ace Bergman. “Plus, in the studio he is willing to try all sorts of different stuff, so he may well use a piece of gear once for a recording and never again. Or we use something at two live shows and decide not to keep using it.
“Or maybe something shows up in a photo behind him and people think he is using it. The guy plays guitar seven days a week in all sorts of settings, no one, not even him, will have a complete picture of all the gear he has and/or does use.”
Maybe the trick is not to obsess over the gear your icon used, or the techniques for that matter, and just focus on sounding like you first of all.
For more features, click here.
The post Five myths about Slash’s gear that people still believe appeared first on Guitar.com | All Things Guitar.