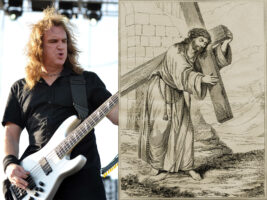 David Ellefson on being outed from Megadeth following sex scandal: “I know how Jesus felt”

Ex-Megadeth bassist David Ellefson has reflected on the fallout from the sex scandal that led to his ejection from the thrash band, comparing the persecution he faced to the crucifixion of Jesus Christ.

READ MORE: The best guitar pedals to buy in 2021: 10 best pedals for praise and worship music

Ellefson was fired from Megadeth following the circulation online of footage of him masturbating on a video call with a 19-year-old fan. The fan’s age initially led to accusations of grooming being levelled against Ellefson. However, the woman in question’s age was confirmed by her (and a police report) to be 19 at the time of their first sexual encounter.
Ellefson has filed a ‘revenge porn’ lawsuit against the person who uploaded the videos to the wider internet (not the fan in question), and is reportedly preparing a defamation lawsuit as well.
During an appearance on The Metal Interview podcast, Ellefson was asked about his thoughts and feelings on the incident six months after the fact. “I’m okay. I just went dark,” he said. “I took the time to just sort of process it all, heal up from it.
“I’ve obviously never had anything quite like that happen to me before. And the fact that it was happening like that was just… I couldn’t believe the level of just shittiness of humankind; I just couldn’t even believe it, man.”
Ellefson continued, stating his view that the level of vitriol and outrage directed his way was akin to being nailed to a cross. “Now I… Not to use a religious reference, but I guess I know how Jesus felt: ‘Carry your cross and then kill him. Shit, we got the wrong guy.’” he said.
“Not to make it a religious thing,” he repeated, before saying: “It’s just one of those things, I couldn’t even believe it. I’m not gonna lie – I deserve better than that. Which is why I got off social media and I got away from all that stuff. And I was just, like, you know what? I have poured my whole life into my craft and my work and my art and being a performer and entertainer, and no one deserves to be treated like that. That’s just absolutely uncalled for on any level.”
Ellefson has since launched his new band The Lucid’s first new music. He has also commented on his decades-long legacy with Megadeth, saying that his “DNA is all over” the metal band’s enduring success and best-known songs.
You can hear his appearance on The Metal Interview below.

The post David Ellefson on being outed from Megadeth following sex scandal: “I know how Jesus felt” appeared first on Guitar.com | All Things Guitar.