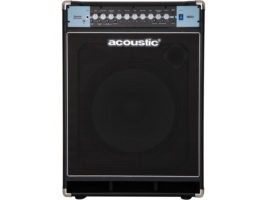 Every month, we compile a list of announcements, releases and rumours from amp and speaker makers big and small. Here are our favourites from the past month.
Acoustic B300C

The B300C is a no-nonsense 300-watt bass combo that’ll serve you well both in the studio and on the stage. If you need something with a little more power, Acoustic has also released a 600-watt version.
Boss Nextone-Artist

At the heart of this amp is Boss’ tried-and-tested Tube Logic technology, which claims to accurately emulate tube amps. But the main highlight of this new Nextone model is its ability to toggle between four power tube emulations.
Boss Waza Tube Amp Expander

Despite its size, the Tone Hammer 700 is a powerful bass amp with a tonne of tone-shaping capabilities that come by way of an intuitive control system.
The post Four new electric and acoustic amplifiers: December 2018 appeared first on Guitar.com | All Things Guitar.