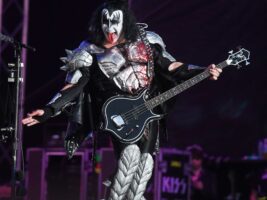 72-year-old KISS bassist Gene Simmons has shared his thoughts on current US President Joe Biden and his predecessor Donald Trump in a wide-ranging new interview.

In a new interview with Spin, ‘The Demon’ revealed his thoughts on myriad topics including Biden and Trump, rock being “dead”, and his own plans for a time when he doesn’t have to put on the full ensemble to play shows.
“I know the previous president [Trump]. I knew him before he entered politics,” Simmons shared while discussing KISS’ previous experiences playing shows and meeting people in Russia.
“Look what that gentleman did to this country and the polarisation – got all the cockroaches to rise to the top,” Simmons continued before laying on the charge, “Once upon a time, you were embarrassed to be publicly racist and out there with conspiracy theories. Now it’s all out in the open because he allowed it.”
This led to Simmons discussing current US president Joe Biden, saying, “I like the ethics and morality – not a charismatic guy, unfortunately. The first word I keep hearing from people, even friends is, ‘feeble.’ I don’t think he should run next time. So then who’s around?”
“There are no stars and invariably people vote for stars, not even what they believe in. The cult of personality. Americans are star obsessed: “Kylie’s got a new lip gloss? Fuck!”
Elsewhere in the interview, Simmon shared that he may play shows with The Gene Simmons Band after KISS retire, calling it “a totally different experience. It’s like being in the Ramones or U2 or something.”
Simmons also expounded on his claim that all other artists would “pass out” trying to perform in his ‘The Demon’ outfit with a challenge, saying, “If you are a blues artist, you can do that until you’re in your mid-’80s, the way B.B. King did at 88. Are you kidding me? Me walking around on stage with dragon boots and all that, even past 75, I can’t imagine it. The physical wear and tear, your heart just is not going to be able to take it. I defy these guys half my age to get into my outfit, see how long you’ll last on stage.”
The post Gene Simmons thinks Joe Biden shouldn’t run for President again: “The first word I keep hearing from people, even friends is, ‘feeble’” appeared first on Guitar.com | All Things Guitar.