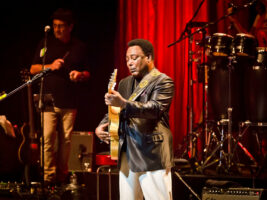 George Benson reveals he’s working on a new album: “I’ve been listening to a lot of things but it was Nat King Cole”

Jazz master and guitar wizard, George Benson, has revealed he’s working on a new album and has also spoke about some of his biggest inspirations whose music have carried him along his creative process.

READ MORE: This Is Spinal Tap cast and crew to reunite for 2024 sequel

His latest album of original material was Guitar Man, released back in 2021, and since then Benson has gone on to release two live albums and a tribute record to Nat King Cole. In a recent interview, Benson opened up on some of his favourite songs, and mentioned that a new record is on the way.
In his Honest Playlist interview with The Guardian, Benson was speaking of the last song he streamed when he said, “​​I’m working on a new record, so I’ve been listening to a lot of things but it was Nat King Cole, Unforgettable. Like Sinatra, he always had the best of everything on his recordings, starting with the best songs.”
The 10-time Grammy winner also gushed over the excellence of Charlie Parker, admitting Just Friends is his favourite song of all time: “I learned so much from it. My father had been telling me all about him when I was still Lil’ Georgie Benson. My set was jukebox hits, and my father would say: “Why you play that mess?” Because that’s what people want to hear! “Play like Charlie Parker.” Charlie who? “Now I know why you can‘t play anything.”
Benson has been no stranger to talking about his humble beginnings, in an interview with us here at Guitar.com last year, he revealed the financial difficulties of trying to make it back in the 70s when playing in London, “I didn’t make a dime because I spent all my money on the airplane getting the band and my equipment over.” In his chat with The Guadian, he even remembered playing on the street for coins, performing Nat King Cole’s Mona Lisa.
No official announcement has been revealed on any new music yet, but we’re keeping our fingers crossed for new, guitar magic. You can get tickets for his upcoming tour here.
The post George Benson reveals he’s working on a new album: “I’ve been listening to a lot of things but it was Nat King Cole” appeared first on Guitar.com | All Things Guitar.