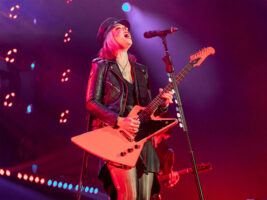 Gibson have teamed up with their brand ambassador, Lzzy Hale of Halestorm, to develop a hybrid Explorer Bird model, and it just so happens a prototype has already been taken for a spin and received glowing feedback.

Lzzy Hale was the first female ambassador taken on by Gibson, and since then has worked on a handful of models with the brand including the Gibson Lzzy Hale Explorer and Lzzy Hale Dark Explorer which had a more friendly price tag.
In a recent interview with TotalGuitar, Hale revealed her latest collaborative project – the hybrid Explorer Bird model, which as you may have guessed, ties together the Firebird and Explorer.
In the interview she said she aimed to create “a different animal altogether” by bringing this creation to life, and spoke of how the idea came to be: “I think it was at the NAMM right before lockdown – we were doing some projects with Gibson – and I mentioned offhandedly that it would be cool to have a Firebird headstock on an Explorer body.”
Shortly after her casual comment, production soon began on the prototype which she’s already taken to stage, “I’m playing it in drop C right now for both Back From The Dead and our latest single The Steeple, because it just handles those low tunings really well, I don’t know if it has something to do with the headstock – but probably. It sounds really mean.”
You can check out the prototype in use by watching the video below:

The model is due to arrive later this year, but the existing prototype gives us a good idea on what to expect. Hale has revealed the axe will host a red and black finish and gold hardware. It will also house 1970s humbuckers, rather than the standard ‘57 Classic humbuckers found on her Explorer signature models.
To check out Halestorm on tour, you can get tickets here.
The post Gibson and Lzzy Hale to bring hybrid Explorer Bird model to life appeared first on Guitar.com | All Things Guitar.