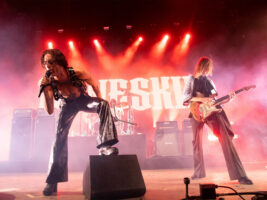 Four-piece rock sensation Måneskin have released their brand new single, Supermodel, and are due to perform the new track live tomorrow (May 14) back where it all began – Eurovision.

The Italian rock band shot to fame following their win last year and have since amassed many fans from their music going viral on TikTok. According to a statement published in NME, their brand new track was inspired by “the many characters they met during their time in LA.”
You can listen to the summer-ready track below:

The band went on to add, “At times we were surprised yet intrigued to find how people cared so much about the idea of ‘celebrity’ and status, obsessing over their looks and connections.”
They explained, “We started to imagine an enigmatic Supermodel character. She is really cool, fun and social, yet in reality she is troubled, hiding sadness and addiction. In a way you love her, because she knows how to have a good time, but you also want to avoid her, because she might get you into trouble.”
The track showcases the usual raspy vocals of frontman Damiano David and showcases a cheeky riff and a back and forth rhythm similar to Nirvana’s Smells Like Teen Spirit on guitar.
Supermodel will be performed live tomorrow night for the first time during the final for Eurovision which takes place at the PalaOlimpico in Turin, Italy, following the bands win.
Although no news of an album has been confirmed yet, the band are due to head out on tour in the UK and Europe in 2023, you can get tickets here but act fast as availability is low.
The post Måneskin drop new single Supermodel ahead of Eurovision performance appeared first on Guitar.com | All Things Guitar.