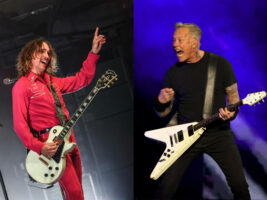 Metallica’s James Hetfield once gave support to Justin Hawkins of The Darkness during his struggles with alcohol, it has been revealed.

READ MORE: Gibson releases exclusive Les Paul Standards with Flamed AAA Tops – but you can’t see them before you buy

The two bands toured together back in 2003 and Hawkins admits he was struggling with “certain behaviours”, including drinking, at the time. In a recent video posted to Hawkins’ YouTube Channel he sat down to analyse Metallica’s performance on the Howard Stern show, where they teamed up with 2000s pop-legend, Miley Cyrus, for a new version of Nothing Else Matters. Before he settled in to the performance, he made some honest confessions.
“I love Metallica, let’s just get that out there.” He begins, before opening up on the support given to him by frontman, Hetfield. “We actually did a bit of touring with Metallica,” He adds, “And James Hetfield could recognise in me that I might have been struggling a little bit with certain behaviours.”
He makes a drinking motion in front of the camera before continuing, “He was really kind; he took me to one side and gave me his number and was like, ‘If you ever need to talk to anybody…’ Really supportive, and an excellent person.”
Metallica’s drummer Lars Ulrich didn’t appear to notice the extent of Hawkins’ alcohol struggles, which he now laughs at with fond memories, “Lars Ulrich was an excellent person but in the other way, he was somebody that encouraged me to party and partied with me, so happy days one and all!”
Hawkins’ struggles with alcohol and substance abuse led him to taking some time in rehab in 2006. Shortly after, he left the band but they reunited once again back in 2011. He now makes regular content on his YouTube channel, you can watch the full video below:

The post Metallica’s James Hetfield supported The Darkness’ Justin Hawkins during his struggles with alcohol appeared first on Guitar.com | All Things Guitar.