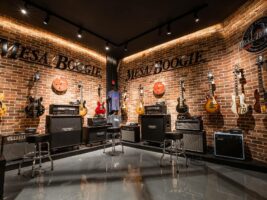 Gibson appears to be hiring for a Gibson Garage in London

A new job listing by Gibson suggests the guitar makers are preparing to open their second Gibson Garage store, this time in the UK.

A new listing seeking a retail general manager was posted by Gibson Brands on job seeking site Glassdoor, with the details specifying that the Gibson Garage will be located somewhere in central London.
While no other specifics on the Gibson Garage itself were mentioned in the listing, it does specify that the candidate will have to “keep the space engaging during both store hours as well as after hours” and “manage the space during crowded live performance events”.
Gibson has not officially announced the opening of a Gibson Garage in London at the time of writing.
The first Gibson Garage was opened on 9 June last year in the historic musical city of Nashville, Tennessee. The 8,000-square-foot flagship store features a range of Gibson, Epiphone, and Kramer guitars, Mesa/Boogie amplifiers, and KRK studio equipment and is equipped with interactive installations as well as a stage for performances.
The Gibson Garage also includes a Custom Shop with the world’s first in-shop Made to Measure bar.
Gibson also hosted a virtual concert titled the Gibson Live: A Celebration of Artists To Benefit Gibson Gives to celebrate the launch of the Gibson Garage, which featured Warren Haynes, Joe Bonamassa, Marcus King, Orianthi, Emily Wolf, Jared James Nichols and more. The concert also benefited the charitable arm of Gibson by donating 100 per cent of its proceeds to MusiCares and Save The Music.
In other recent Gibson news, the guitar maker’s extremely-limited Noel Gallagher ES-355 is already being resold by scalpers for £5,000 over its original price. Only 200 of the signature models were made, now entirely out of stock, they were originally being sold at $9,999 on the official Gibson website.
The post Gibson appears to be hiring for a Gibson Garage in London appeared first on Guitar.com | All Things Guitar.