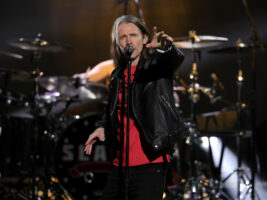 Myles Kennedy clears the air on his Telecaster-shaped PRS: “It’s still too soon to tell”

Myles Kennedy has addressed the Telecaster-shaped PRS he was spotted with earlier this year and whether it will be a signature model of his in the near-future.

READ MORE: Guitarists are raving about this $58 pedal John Mayer used on tour

In a new interview with Ultimate Guitar, Kennedy revealed that he had the guitar custom-made to achieve a particular sound.
“It’s got a T-style look to it, yeah,” the Alter Bridge singer said, explaining, “So it’s just all black, and it has the neck dimensions I like – a big, fat neck, and it feels really good, and it sonically does what I need it to do. It’s beautiful.”

Kennedy also commented on whether the guitar would ever show up as a signature model, commenting, “Well, right now, it’s just one of the guitars in the stable to essentially utilise when I need to hear a certain sound. So I think that it’s still too soon to tell whether that would eventually be something which would be a signature model or not.”
“Right now, it’s just a paintbrush in the Sonic accessory kit.”
Kennedy was spotted with the guitar in an Instagram post of the rocker performing in Hamburg, Germany on 1 June, setting the guitar world abuzz. Kennedy’s Telecaster appears to sport the same back-angled reversed PRS headstock that appears on the Silver Sky, along with what looks like a Narrowfield pickup.
In a June 2021 interview with Guitar.com, Kennedy talked about his recent solo album The Ides of March, and the focus on vintage guitar sounds on the record. A 1965 Gibson J-50, a 1945 000-21 Martin, the 1944 Gibson J-45, as well as a a 335 and a “Frankenstein”  1952 Telecaster were some the instruments Kennedy highlighted, with the artist explaining, “I wanted to have plenty of opportunities to improvise and solo. I felt like this would be [a] more appropriate [time] to plug in.”
The post Myles Kennedy clears the air on his Telecaster-shaped PRS: “It’s still too soon to tell” appeared first on Guitar.com | All Things Guitar.