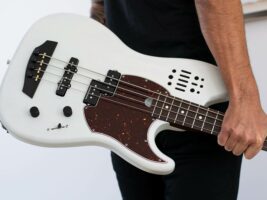 READ MORE: “I wish I were the type of person who could sell a guitar”: Jamey Arent on the versatility of the 335 and being sentimentally attached to his guitar collection

The RG-4 Ultra, which is made entirely in Canada, has a Chambered Canadian Laurentian Basswood body, Hard Rock Maple neck, Rosewood fingerboard, and an ebony bridge.
Featuring passive Seymour Duncan magnetics with volume and tone controls, the RG-4 comes fitted with a set of LR Baggs HEX saddles with a custom ergonomic pre-amp to control the acoustic volume, treble, mid, bass and saturation along with a ‘fat-switch’ for mid-low boost and presence.
The bass also features two separate ‘acoustic/ electric’ output jacks as well as a combined ‘mix’ output, allowing players to create multiple bass textures.
Gibson describes the bass as “ultimately versatile”, and says that the RG-4 can go from classic electric to authentic acoustic bass sounds in an instant — making it two-basses-in-one. Definitely a solid choice for anyone finding it hard to pick just one bass.
As of now, the RG-4 is only available in a modest semi-gloss Carbon White finish, so fans of whackier colours and designs will have to look elsewhere.
Based in Montreal, Quebec, Canada, Godin Guitars was established in 1974 and consists of the following brands: Godin Electric, Acoustic & Nylon; Seagull, Simon & Patrick, Norman, and Art & Lutherie.
Pricing for the RG-4 Ultra Carbon White RN is yet to be revealed. Find out more at godinguitars.com