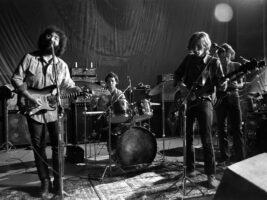 Grateful Dead’s legendary guitars, amplifiers and Wall Of Sound gear are going up for auction

Stage-played guitars, vintage amplifiers and a chemistry set from the “King Of LSD” chemist Owsley Stanley are some of the items going under the hammer in the Grateful Dead’s upcoming auction event in partnership with Sotheby’s.

The legendary jam band will part with an eclectic mix of instruments and gear as part of From the Vault: Property from the Grateful Dead and Friends. Leading the pack is a stage-played 12-string Guild Starfire electric and McIntosh 2300 amplifier, played by late guitarist Jerry Garcia and expected to fetch at least $50,000 and $5,000, respectively.
The auction also lists surviving parts from the band’s Wall Of Sound: a towering PA system for live concerts conceived in 1974, composed of 89 solid-state and three vacuum tube amplifiers, and 604 speakers total.
Some other items in the sale include Garcia’s heavily-used blackpanel Fender Twin Reverb shell (est. $2,000 to $3,000), his skull-embroidered custom Nudie pants; pre-worn (est. $20,000 to $30,000), Mickey Hart’s stage-played Sonar drum set with cymbals and hardware (est. $10,000 to $15,000), and much more.
Personal items from crew members – including Lawrence “Ram Rod” Shurtliff’s psychedelic jumpsuit (est. $20,000 to $30,000) – will also be going under the hammer.
From the Vault: Property from the Grateful Dead and Friends is scheduled for 7 to 14 October. Until the end of August however, the public is invited to see the items for themselves at Sotheby’s gallery in Manhattan, New York.
Learn more about the event at sothebys.com
The post Grateful Dead’s legendary guitars, amplifiers and Wall Of Sound gear are going up for auction appeared first on Guitar.com | All Things Guitar.