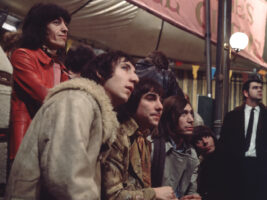 Pete Townshend, Roger Daltrey mourn Charlie Watts: “He wept at Keith Moon’s funeral. I wish I was capable of such tears today”

Pete Townshend has penned a heartfelt tribute to Rolling Stones drummer Charlie Watts, who passed away earlier this week at the age of 80.
Sharing a photo of a double rainbow on Instagram, The Who guitarist wrote: “Charlie Watts wept at Keith Moon’s funeral. I wish I was capable of such tears today. Instead, I just want to say goodbye.”
He continued: “Not a rock drummer, a jazz drummer really, and that’s why the Stones swung like the Basie band!! Such a lovely man. God bless his wife and daughter, and I’ll bet the horses will miss him too.”

Meanwhile, The Who frontman Roger Daltrey honoured the late drummer in an open letter that described Watts as “the perfect gentleman, as sharp in his manner of dress as he was on the drums”.
“Charlie was a truly great drummer, whose musical knowledge of drumming technique, from jazz to the blues, was, I’m sure, the heartbeat that made the Rolling Stones the best rock and roll band in the world,” Daltrey wrote. “I would like to extend my deepest condolences to Charlie’s wife Shirley, the rest of his family and to the guys in the band.”
The Who join the likes of Paul McCartney, Ringo Starr, Elton John, Graham Nash, Ry Cooder and many others to post online tributes to the legendary skin man.
The post Pete Townshend, Roger Daltrey mourn Charlie Watts: “He wept at Keith Moon’s funeral. I wish I was capable of such tears today” appeared first on Guitar.com | All Things Guitar.