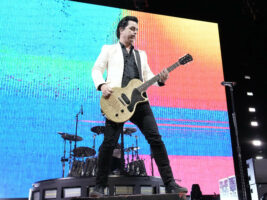 Green Day cancels Moscow concert due to Russia’s invasion of Ukraine: “We are aware that this moment is not about stadium rock shows, it’s much bigger than that”

READ MORE: Dave Grohl recalls being electrocuted by a guitar pedal after jumping in a pool

The band, who made the announcement via Instagram stories on Sunday (27 February), wrote, “With heavy hearts, in light of current events we feel it is necessary to cancel our upcoming show in Moscow at Spartak Stadium.”
“We are aware that this moment is not about stadium rock shows, it’s much bigger than that. But we also know that rock and roll is forever and we feel confident there will be a time and a place for us to return in the future. Refunds available at the point of purchase. Stay safe.”
The concert was scheduled for 29 May as part of an ongoing Hella Mega Tour by rock bands Green Day, Fall Out Boy, and Weezer. Spartak Stadium, where the show was set to take place, is a massive arena in Russia’s capital boasting an audience capacity of over 45 thousand.
The band is set to perform for several upcoming US festivals before heading to Europe in June to play a number of shows. At the time of writing, the 29 May tour date has been removed from Green Day’s website.
Russian president Vladimir Putin’s invasion of Ukraine earlier this week has been met with widespread condemnation, with the punk rock band being the most high-profile American act to cancel a Russian concert following the news so far.
Other artists, such as indie-pop trio AJR and Russian rapper Oxxxymiron, have similarly cancelled shows and tours in Russia, in order to protest the invasion of Ukraine. Whether others will follow suit remains to be seen.
The European Broadcasting Union has also banned Russia from this year’s Eurovision Song Contest, the world’s longest-running annual international televised music competition.
The post Green Day cancels Moscow concert due to Russia’s invasion of Ukraine: “We are aware that this moment is not about stadium rock shows, it’s much bigger than that” appeared first on Guitar.com | All Things Guitar.