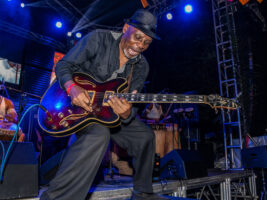 Guitar Tales: The remarkable impact of Congolese guitarist Tamfum/Fidel, and the tuning that would define a whole genre of guitar music

It’s near-impossible to talk about the history of soukous, the Congolese-derived dance music that swept to popularity in Africa and France in the latter half of the 20th century, without mentioning Tamfum. The guitarist, who was known as Fidel in the 1970s, hails from Kinshasa, the capital of the Democratic Republic of Congo and he’s legendary within the scene not just for his fearless touring across Africa, but also because he was a pioneer in the use of alternate tunings when playing soukous music. This is the story of a man whose legacy strides four decades.

READ MORE: Guitar Tales: How crisis and conflict in Africa has reshaped the guitar culture