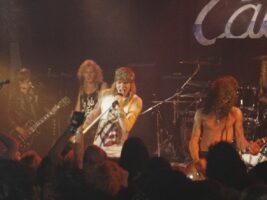 Guns N’ Roses have announced a massive 97-track Use Your Illusion I & II album set that will feature 63 unreleased songs – including a new version of November Rain.

Use Your Illusion I & II Super Deluxe includes previously unreleased songs and videos alongside newly remastered versions of both albums, high-resolution transfers form the original analogue masters.
Notably, there will also be a version of November Rain with a newly recorded 50-piece orchestra conducted and arranged by composer Christopher Lennertz.
Along with that, it will include for the first time, the band’s complete Live in Las Vegas show at the Thomas & Mack Center on January 1992 for the first time.
These sets come in two main versions: one with 12 vinyl records and the other with 7 CDs. Both editions will also include a Blu-Ray and a smorgasbord of collectibles.
Outside of new tracks, fans can look forward to a 100-page hardcover book with unreleased photos, memorabilia and archival documents including replica backstage passes and replica concert tickets, as well as a new 24″ x 36″ poster will also be included.
Image: Guns N’ Roses
And if you aren’t planning to pick up physical copies, you’ll be pleased to know that all tracks will be available digitally, either via streaming or by download. Pre-orders can be made here.
Famed band manager Alan Niven recently spoke about his time managing Guns N’ Roses, noting that he was surprised at the success of Use Your Illusion I & II.
Claiming the band would have almost certainly fallen apart without the contributions of rhythm guitarist Izzy Stradlin, he explained: “As far as I was concerned, it was his band – he had the cool disposition and the unimpeachable street vernacular. Add to that the syncopation of his right rhythm hand, and you have a personification of rock ‘n’ roll right there.”
The post Guns N’ Roses’ Illusion box set has 63 unreleased tracks and a new version of November Rain appeared first on Guitar.com | All Things Guitar.