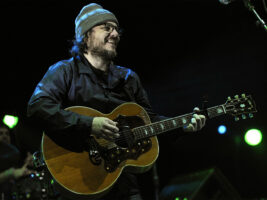 Wilco’s Jeff Tweedy has shared a cover of Roky Erickson’s track For You (I’d Do Anything). The cover is part of Light In The Attic’s upcoming covers compilation May The Circle Remain Unbroken: A Tribute to Roky Erickson, which will be released on 17 July as part of Record Store Day.

The compilation will also feature contributions from names such as Margo Price, Neko Case, Ty Segall, Gary Clark Jr and Eve Monsees, Lucinda Williams, and Chelsea Wolfe.
Erickson died in 2019, and is remembered as a pioneering figure of the early psychedelic rock scene. He was the founding frontman of the 13th Floor Elevators, beginning his career with them in 1965. As well as three studio albums released by the band, he had a prolific solo career.
The track For You (I’d Do Anything) is taken from Erickons’ 1995 solo album All That May Do My Rhyme, and exemplifies how his post-13th Floor Elevators career tended towards more straight-ahead rock and folk-rock rather than psychedelic rock.
You can hear Tweedy’s cover below.

Wilco’s latest studio album was 2019’s Ode To Joy. This was followed by Jeff Tweedy’s 2020 solo album Love Is The King, which garnered huge praise for its sensitive songwriting and focused sound, making use of heavily layered guitars.
The post Hear Jeff Tweedy cover Roky Erickson’s For You (I’d Do Anything) appeared first on Guitar.com | All Things Guitar.