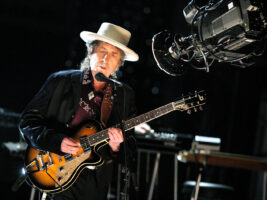 Bob Dylan has shared a short teaser for Shadow Kingdom, giving fans an idea of what they can expect from the upcoming livestream concert.

READ MORE: The Genius Of… Blonde On Blonde by Bob Dylan

Shadow Kingdom is set to premiere on 18 July. Yesterday (1 July), Dylan shared a 30-second preview of the event on social media. It showed him performing his 1971 single Watching The River Flow, which he hasn’t performed live since 2014.
The teaser also showed that Dylan will be appearing with a full backing band – complete with an accordion player. A title card that appeared onscreen read, “The Early Songs Of Bob Dylan”, suggesting the folk icon will be tapping his early material for Shadow Kingdom’s setlist.

Tickets for Shadow Kingdom are available for $25 and can be watched for a two-day period. The show will be hosted by Veeps, and you can get tickets here.
The performance is set to be Dylan’s first since 2019, when he played Washington DC’s The Anthem after an extensive North American leg of his Never Ending Tour. It will also be Dylan’s first broadcast performance in nearly three decades, since his appearance on the MTV Unplugged series in 1994.
While Dylan didn’t perform live in 2020, he did release his 39th studio album, Rough and Rowdy Ways, on 19 June 2020. It marked his first album of original songs since 2012’s Tempest.
The post Watch: Bob Dylan shares teaser for upcoming Shadow Kingdom livestream concert appeared first on Guitar.com | All Things Guitar.