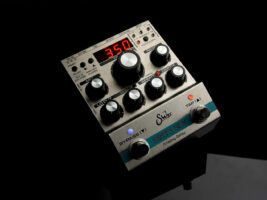 Suhr has officially entered the delay market with the Discovery, an impressive analogue delay pedal with powerful specs, expansive controls and more.

The Discovery enlists four re-issued MN3005 bucket-brigade chips to deliver its classic, warm-sounding echoes. Delay times range from 40ms all the way to 1100ms, further extendable to 17ms to 2000ms through subdivision controls.
Some features that set the Discovery apart from other analogue delays are its 127 programmable presets, tap tempo and MIDI-controllability. The “smart” tap tempo averages out four foot taps to help you get in the ballpark of your target tempo.
There’s also modulation onboard, which includes triangle, sine and square waveforms, paired with speed and depth controls.
Suhr has also thoughtfully included a soft limiter in the circuit. This should be useful for when you set the regen (feedback) control way up to in self-oscillation territory, preventing you from deafening your audience (and yourself).
Plus, the Discovery offers custom expression mapping saveable to each preset, along with the ability to control any parameter via MIDI. The latter could make this a killer studio delay, as you can easily route it to your DAW of choice. You’re also able to choose between true- and buffered-bypass and there’s also a kill dry mode for running a parallel effects loop.
Check out a demo of the Discovery below: