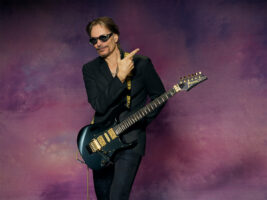 READ MORE: Steve Vai’s latest endorsement is a chair for guitarists: “It’s like my butt was moulded into wooden butter”

The new song was, notably, recorded almost exclusively on a hollow-bodied Gretsch, rather than Vai’s more usual Ibanez signature models. Vai said in a statement about the choice of guitar and the song’s writing as a whole: “It’s on the wall with all the other guitars, and I’d always just look at it and go, ‘One day I’m going to play you…
“In writing the chord changes for the solo section, and the solo itself, I dug deep into my academic music theory mind to create a set of chord changes where the harmonic atmosphere shifted on every change. The dense chord structures required a series of synthetic modes to navigate. This approach is along the lines of jazz and fusion players, but I knew I did not want it to sound anything like that and the solo had to be totally melodic. The results were pretty powerful in that the entire solo section evokes melodic atmospheric changes that shift dramatically but work together well.”
Take a listen to the new track:

The tracklist for Inviolate is below. The record can be ordered here.