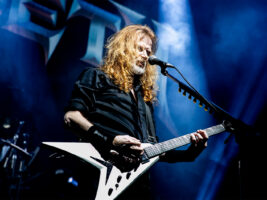 Megadeth have announced the launch of their very own cryptocurrency, which will give fans access to exclusive and premium benefits.

READ MORE: 5 pieces of iconic guitar gear that were lost… and are still missing today

$MEGA is the official cryptocurrency of the pioneering thrash metal group and was announced in a Facebook statement, which explained: “By buying, holding, and transacting with $MEGA, fans will gain access to exclusives and premium benefits.”
“Cyber Army members that also hold $MEGA will unlock additional exclusives, access, and offers,” it continued. “As a thank you to the Cyber Army, we’re gifting $MEGA to all of our Premium, Deluxe and Free members.”

Megadeth Coin is here! $MEGA, the official cryptocurrency of Megadeth and our community, is available now!By buying,…
Posted by Megadeth on Thursday, December 2, 2021

The currency continues the band’s expansion into the blockchain. Earlier this April, Megadeth sold their first non-fungible token (NFT), a digital art piece titled Vic Rattlehead: Genesis, for 8.4 ETH, or about $18,000 at its time of purchase.
In other Megadeth news, the band are gearing up to release The Sick, the Dying… And The Dead!, their 16th studio album in 2022. The band’s current line-up consists of frontman Dave Mustaine, guitarist Kiko Loureiro, drummer Dirk Verbeuren and bassist James LoMenzo, who replaces David Ellefson following his ejection from the group, after videos of him masturbating on a video call with a fan surfaced online.
The post Megadeth has launched their official cryptocurrency because why not, it’s 2021 appeared first on Guitar.com | All Things Guitar.