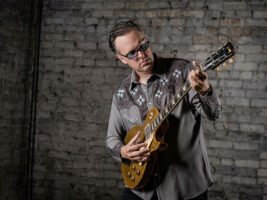 Joe Bonamassa has released the title single from his upcoming album Time Clocks, alongside a nautical music video.

The track itself is over seven minutes in length, with “all the epic musical grandeur of [Bonamassa] at his most expressive and ambitious.”
Take a look and a listen below.

For Time Clocks, Bonamassa recruited long-time collaborators Kevin Shirley as producer and Roy Weisman as executive producer. The album’s band includes Steve Mackey on bass, Lachy Doley on piano, Bunna Lawrie on didgeridoo, Bobby Summerfield on percussion, and Anton Fig on drums and percussion. Backing vocals are by Mahalia Barnes, Juanita Tippins, and Prinnie Stevens.
Discussing the difficulties of recording during the pandemic, Bonamassa revealed in a statement the extent to which the band worked to break down their traditional recording methods. “We found ourselves at Germano Studios, cutting music as a trio (but not trio music) and having to invent ways of making records when your lifelong producer is stuck in Australia due to travel restrictions,” he said. “Kevin Shirley came up with a way of linking continents and consoles to where we had literally zero latency. Add Steve Mackey and Anton Fig to the mix, a few masks and curse words and we have the ‘New York Record’, AKA Time Clocks.”
The album will be released in full on 29 October. You can preorder it here.
The post Hear the title track to Joe Bonamassa’s new record Time Clocks appeared first on Guitar.com | All Things Guitar.