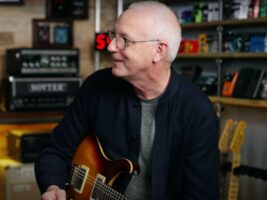 “I can’t name a guitar Horsemeat – in the pedal business, you can get away with murder!”: Paul Reed Smith explains his pedal names

Paul Reed Smith has revealed the reasons behind his first-ever range of effects pedals – and offered an explanation into why he named one of them “Horsemeat”.

Appearing on that That Pedal Show, the PRS founder provided insight into why he expanded his brand into the effects market and explained the story behind his pedals’ odd names.
“I can’t name a guitar Horsemeat – in the pedal business, you can get away with murder,” he exclaimed when asked about his overdrive pedal, which gathered interest due to its less-than-conventional name.
“We weren’t gonna name it that [originally]. The joke was that it ate Klon Centaurs for breakfast,” he explains. “I went into the office of the person who was designing the pedals [and] said ‘You can’t call a pedal Horsemeat!’ [He] quickly said ‘We’re not changing that name.’ I go ‘You can’t do that!’ [and] he goes ‘We just did… and we all like it.’”
Smith continues to address the confusion regarding the name, adding: “[Some people] think I’m putting horses in one side of the factory and pedals come out the other. That’s not what’s going on. I’m sorry, it’s just a name… get over it! You’ve got some pedals up here with names I can’t repeat on film! We didn’t do that.”
In the interview, the developer also explains how it was the Klon Centaur that inspired him to manufacture his own range of pedals.
“It had a kind of asymmetrical, good, throaty distortion but as I turned the gain up, the bass went down. I tried to use it but I couldn’t because it took that beautiful bass of my amp away and I didn’t like that,” he says.
“I said ‘well, let’s design a circuit! I want control over the treble. I want control over the bass. I want control over the high mid-range and I want control over how throaty it sounds’. So, we made one and it ended up being magic.”
The post “I can’t name a guitar Horsemeat – in the pedal business, you can get away with murder!”: Paul Reed Smith explains his pedal names appeared first on Guitar.com | All Things Guitar.