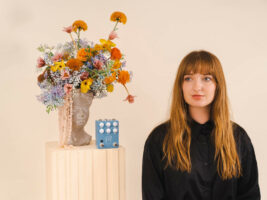 JHS partners with Madison Cunningham for the Artificial Blonde vibrato

JHS has partnered with Madison Cunningham to release the Artificial Blonde vibrato, a pedal based on the musician’s signature sound, particularly on the album Who You Are Now.

Artificial Blonde at its core is a simple, yet musical take on Cunningham’s sound: it’s a vibrato pedal with a “slightly 3D” sound, true pitch and two easily accessible modes to save you from having to bend over and make adjustments.
Sound-tweaking is done through six knobs: Volume sets the effect’s overall loudness; EQ is an active tilt in which noon is flat; Speed and Depth adjust the rate and prominence of the vibrato effect – there’s a set of these for each preset.
On top of this, Artificial Blonde has an optional stereo output which lets you get a sense of dimension from the effect.
The pedal is based on the JHS Emperor which Cunningham used to create the signature guitar sound on her second album – albeit with some changes that make it much more stage-friendly.
“During a sound check in Lawrence, Kansas, Josh noticed that even though her Emperor was always on and in vibrato mode, Madison kept reaching down to switch the settings to create another faster and deeper vibrato tone for a particular song,” reads a blurb on the product page.
“Sensing an opportunity to make it easier to use during live shows, Josh developed the idea for an entirely new stompbox that suited Madison’s needs, and soon she was touring with that first prototype.”
“Simply put, this is Madison Cunningham in a box: just add a clean Fender-style amp and tune your guitar strings down!”

Artificial Blonde is available for $249. Learn more on the JHS website.
Cunningham is currently on the road promoting her latest album, Revealer, across the US. She’ll be in New York’s Webster Hall tonight (21 October), and Washington DC’s Howard Theatre tomorrow.
The post JHS partners with Madison Cunningham for the Artificial Blonde vibrato appeared first on Guitar.com | All Things Guitar.