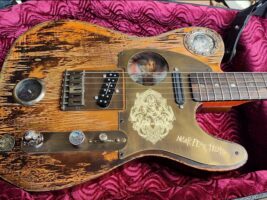 Johnny Depp has been given a one-of-a-kind ‘Shipwreck’ guitar, which was designed and custom-made for him by luthier David Petillo.

During his time away from acting, Johnny Depp has made waves in the music industry for his role alongside Alice Cooper and Joe Perry as part of The Hollywood Vampires. Most recently, however, the musician has been seen hitting the stage alongside guitar icon Jeff Beck, joining him for his current US tour.
It was during one of these performances that the actor showcased the latest axe to be added to his collection: a tailor-made ‘Shipwreck’ guitar, inspired by the Pirates of the Caribbean films.
Designed and manufactured by David Petillo, the luthier fashioned the one-of-a-kind instrument out of a two-century-old basswood body, paired with a fully functional brass compass that dates back to 1899.
Alongside the Telecaster-style body, the guitar also features a flame maple neck and a 12” fretboard made out of ziricote – an exotic, rarely-used wood that bears resemblance to rosewood.
As described by the luthier on his Facebook page, other additions to the axe include a hand-carved Tahitian grey pearl inlay of the actor’s daughter, and two pickguard engravings which feature the Grim Reaper and scripture saying “Never Fear Truth”.
In addition, a holographic image is also embedded near the strings and the tone knob is made to resemble a deep-sea diver’s helmet.
Gifted to Depp earlier this week, the guitar made its live debut during a performance with Jeff Beck in Toronto, which took place on Monday (17 October). Find footage of the moment below.

Jeff Beck’s 18 Tour is still underway, with Depp scheduled to make onstage appearances at a number of shows. Further details on the custom-made ‘Shipwreck’ guitar can be found on David Petillo’s Facebook page.
The post Johnny Depp shows off new custom ‘Shipwreck’ guitar, inspired by Pirates of the Caribbean appeared first on Guitar.com | All Things Guitar.