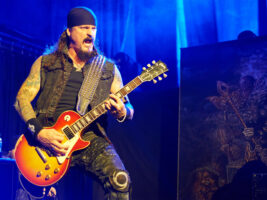 Iced Earth guitarist Jon Schaffer is among those being sued by District of Columbia attorney general Karl Racine for his role in the deadly 6 January Capitol Riots. Schaffer pleaded guilty to two felony offences related to his role in the riots: obstructing an official proceeding of Congress and trespassing on restricted grounds while armed with a deadly or dangerous weapon.

READ MORE: Iced Earth guitarist Jon Schaffer had “urine and faeces” thrown at him while in jail, lawyer says

Schaffer is named directly in the 84-page complaint, which alleges that members of the extremist groups at the centre of the riots should be the ones to bear the costs. Two groups are also explicitly named: the far-right, neo-fascist Proud Boys, and the Oath Keepers, a loose but fervent anti-government militia. Fifty anonymous defendants are also named, those who are unknown but conspired to carry out the attack.
Racine is asking the court to find the organisations and their members liable for the millions of dollars spent responding to the violence, both on the day itself and in the aftermath, paying for the medical expenses and leave of injured officers and the cost of dispatching police to deal with the attack.
Racine said in a news conference on Tuesday: “No one bore the brunt of this gutless attack more than the courageous law enforcement officers including the men and women of the DC Metropolitan Police Department, who went into the fire and violence with one objective in mind: remove the violent mob and restore our country’s fragile democracy.”
“The defendants, as you know, were not tourists, nor were they acting patriotically,” he added. “They were vigilantes, members of a mob, insurrectionists who sought to crush our country’s freedoms.”
In the lawsuit, Schaffer is described as a “founding, lifetime member of the Oath Keepers.” Schaffer’s plea agreement is also cited, in which he admitted that he was at the January 6 “Stop The Steal” rally to protest what he believed were fraudulent election results ousting Trump from office. To the rally, he wore a tactical vest and carried bear spray – an extremely dangerous weapon around three times as potent as conventional pepper spray. It is used, as its name implies, to ward off bears. Schaffer also admitted to being at the front of a crowd that broke open doors being guarded by police wearing riot gear, and advancing at officers, causing them to retreat into the capitol building.
Schaffer was pictured amongst the rioters wearing a cap that read “Oath Keepers Lifetime Member,” and was filmed charging at police officers. Notably, the Indiana chapter of the Oath Keepers – the one local to Schaffer – distanced itself from him after his arrest, claiming he was not a member. But the national organisation has not commented on his alleged affiliation with the group.
The Oath Keepers has been described by the Jewish Anti-Defamation League (ADL) as “heavily armed extremists with a conspiratorial and anti-government mindset looking for potential showdowns with the government,” a description that bears extra weight when considering that 20 Oath Keepers members have been indicted for their role in the 6 January violence, with four pleading guilty.
Schaffer, before he became the first Capitol riot defendant to plead guilty, was best known as the guitarist for heavy metal band Iced Earth. The band ostensibly still exists, consisting solely of Schaffer and drummer Brent Smedley. All other members quit following Schaffer’s arrest. The future of the band is unclear but not bright: they have been dropped from their label Century Media records, and Schaffer will unlikely be able to capitalise on the sudden wave of publicity the band is receiving, as he will be too busy being in prison.
The post Iced Earth guitarist Jon Schaffer among those sued by DC attorney general for role in Capitol riots appeared first on Guitar.com | All Things Guitar.