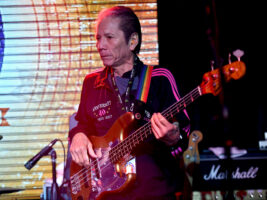 Jamaican session bassist Phil Chen has died at the age of 80. The news was broken in a statement shared by his family on social media.
Chen was born in Kingston, Jamaica, in 1940. He played in various bands throughout his youth, cutting his teeth on the Kingston Club Circuit before relocating to London in the late 1960s. He initially started Jimmy James’ band before moving to session work. His most notable credits began in the mid-1970s, with appearances on Jeff Beck’s Blow By Blow and Donovan’s Cosmic Wheels. He also played on a number of notable Rod Stewart releases, including Hot Legs and Da Ya Think I’m Sexy?.
In the 1980s, he became a member of Star Fleet Project, a short-lived supergroup formed by Brian May alongside Eddie Van Halen.
More recently, he was a member of Manzarek–Krieger, the band formed by ex-Doors members Ray Manzarek and Robby Krieger. His work with Krieger began in 1973, when he joined The Butts Band, a project formed by Krieger and ex-Doors drummer John Densmore.
Other artists Chen played with include Eric Clapton, Pete Townshend, Ray Charles, Jerry Lee Lewis, Jackson Browne, Desmond Dekker and many more.
Chen’s family wrote in a statement on Facebook: “Dear Friends and Family of Phil Chen, with heavy hearts we share the news that Phil Chen passed away on the morning of 14 December 2021 after a long battle with cancer. He spent his final days surrounded by family and close friends and cherished time with his grandchildren who always brightened his day.
“He will be missed greatly and his contagious passion for music and positive energy on and off the stage will be remembered always.”
“We thank you for your outpouring of love and support during this difficult time.”
The post Phil Chen, session bassist for Rod Stewart, Jeff Beck and many more, has died aged 80 appeared first on Guitar.com | All Things Guitar.