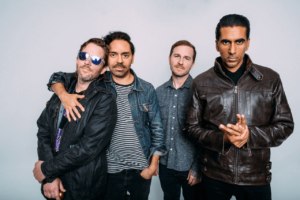 New Jersey rockers Saves The Day were the thinking man’s emo band during the genre’s early 2000s pomp – with their seminal records Through Being Cool and Stay What You are still revered today as examples of what the oft-maligned genre was capable of.
Since those heady days, frontman and guitarist Chris Conley has soldiered on with an occasionally rotating cast of bandmates, releasing a further five albums before five years where many fans wondered if Saves The Day were heading into the realms of heritage touring act, they’ve returned with their aptly titled ninth studio record, 9.
We chatted to the energetic Conley about the new record, and these are the most important things you need to know…
The album’s long gestation wasn’t intentional…
“We just kept going on tours and playing festivals, and then I made an album in between with my other band called Two Tongues. The years, they just spin by quicker and quicker! I actually didn’t realise it had been five years until we started doing interviews for this record.
“It’s just that life gets filled up with so much stuff. I’m also a dad, and that’s the most important thing in my life – my daughter just turned 13 this year, so it’s amazing to me that the last time I put out an album she was eight years old! It’s bizarre – I still feel like the same person, but the passage of time just becomes more surreal!”

It’s the sound of Conley and co having fun…
“I’m just so grateful to be on the other side! I’ve gone through so much – the ins and outs, ups and downs, lefts, rights and in-betweens! I feel like I’m at a  place of genuine contentment and happiness. So I think that was what was helping me to be in a place of reflection, because I have experienced so much and learned so much, I’m comfortable now in my own skin.”

It’s also pretty reflective…
“It’s not consciously being reflective, but it’s just the pace where I am in my life. I wrote a lot of this when I was about 36, and I turned 38 this year. It’s just one of those points in life where you look back and just think, ‘Wow, this has been such a wild ride!’ Through Being Cool was nearly 20 years ago – that’s crazy! I was in college when I wrote that.
“So it seems like the first side of the album is reflecting on my life in Saves The Day. And then on side two, there’s a really long song called 29, and that goes all the way back to my first memory, which is waking up as kid with my heartbeat in my head, and hearing that as music and then my love of music carrying my on to my journey with Saves The Day.”

It’s the sound of a settled band…
“Since day one it’s been me with a revolving cast of recording members. The only time it was really just two guys making records together was when it was me and my friend Bryan starting out at 13 years old through until he left the band after Stay What You Are.
“But the line-up I have now. Arun [Bali, guitar] has been in the band now 10 years, Rodrigo [Palma, bass] will have been in the band 10 years this year coming, and Dennis [Wilson, bass] joined five years ago in April. The longest I’d had a line-up together before that was two and a half years!
“Arun is the best guitar player in the world in my opinion – I really mean that, I’m not just saying that because I love him! I’m the songwriter guy, and he’s like the shredder! When he joined the band he was such a breath of fresh air. I felt like he understood me. No matter how strange a song was, he was excited and inspired, and he would know exactly what to do. So when I play a diminished chord or a m7b5, he knows the exact right thing to play!
“Rodrigo is exactly the same – those two have been in bands for the longest time. They met in driver’s ed in high school and they’ve been working together ever since! I feel so lucky to have those guys as my musical brothers for so long.”

Chris’s favourite riff is an ode to his musical brothers past and present…
“I think my favourite riff is the riff for Side By Side – it’s such a gnarly, 90s, grungey kind of riff. We played it in a decidedly messy way. We made sure there was squeaks and feedback and we just sort of slammed through the guitar. We didn’t try to make it real pretty! That’s just really fun to listen to for me. Arun’s solo is just outstanding. Even the melodies and the notes that he’s pulling out of that solo are just so surprising and cool to me.
“The song is actually about Bryan Newman, who was my first musical brother, literally being by my side with me. But then he quit the band, and I’m still here doing it, and I now Arun has become the person by my side. So I thought it would be great to have the song be about Bryan, but the musical side to reflect my new musical brother, Arun.
“Once I had written the main riff for the chorus, I specifically made sure that the verses would have a feel like Panama – the Van Halen song – so that Arun can do his thing. Arun’s reason for playing is actually Eddie Van Halen, so it’s a symbolic tip of the hat to both Bryan and Arun. And he opened it up and let loose.”

It’s a record full of weird old guitars…
“I used my 1974 Les Paul on most of these songs, but I was also using a 1971 ES-335. So I’m like the Gibson guy and Arun is the Fender guy – he plays a Tele and a Strat on a couple of songs just to give it a quirky 90s feel.
“The studio we used was like this 100-year-old mansion that just had all these really strange and weird guitars laying about. And a lot of it was just like, if I saw a guitar that looked weird, I’d say, ‘Can I use that?!’ ‘Yeah let’s try it out!’”

It won’t be another five years until the next Saves The Day record…
“I would like to do another record more quickly now, especially because my daughter’s at the age where she’s a lot more interested in her friends than dad! I’m lucky that we got to have a nice solid childhood, and she’s off now doing the teenage thing and having fun with her friends.
“But that opens up a lot of time, and it’s one of those things – parents never really want their kids to grow up but… it’s cool. It’s cool for her, and it’s cool for the band. We can make records a lot more frequently, so I’d say we’ll have another album out in two years.

Dad music is still dad music, even when dad is in the band…
“It’s so funny, my daughter barely even acknowledges that I’m in this cool band! I get such a kick out of it. We had a new video come out the other day, and it had all these kids around her age in it who are playing a band and skateboarding… and I’m like, ‘Hey kiddo, you might like this video, there’s kids your age playing in a band!’
“And she watched it and said, ‘Oh, cool.’ That was it! And right back to texting with her friends! She’s more like, ‘Okay, dad.’ I get such a kick out of that, it’s a delightful reminder to just be respectfully humble at all times!”
Save’s The Day’s new album, 9, is out now on Rude RecordsThe post Interview: Saves The Day’s Chris Conley on fatherhood, scuzzy riffs, and their first new album in five years appeared first on The Guitar Magazine.

NAMM 2020: Reverb put a Klon Centaur and Lovetone Big Cheese on one pedalboard