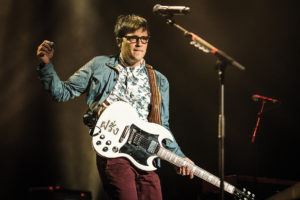 Platinum-selling LA power-pop outfit Weezer are back with a brand new album, Pacific Daydream, which gives greater emphasis than ever to the unique guitar relationship between frontman Rivers Cuomo and sideman Brian Bell. Josh Gardner caught up with the pair on their recent UK tour to discuss their roles in the band, and the equally individual gear that they choose to use…
Photography Eleanor Jane
For over two decades now, Weezer have been troubling airwaves and arenas all over the world with their unique brand of guitar-driven pop. But while the basic Weezer recipe is a beautifully simple blend of classic chord progressions and singalong choruses, the band have endured when dozens of imitators have fallen by the wayside, chalking off 11 studio albums in the process. But none of those wannabes had Rivers Cuomo…
The embodiment of an awkward musical genius, Weezer’s bespectacled frontman isn’t just a wonderful songwriter with a knack for a catchy pop hook – he’s also a guitarist who grew up worshipping at the altar of 80s heavy metal, and he rarely wastes an opportunity to demonstrate that he can shred a neoclassical solo with the best of them. The flipside of the Weezer guitar coin is Brian Bell – Weezer’s second guitarist is a perfect foil to his band leader, holding the whole thing together with sensitive guitar parts and perfectly judged vocal harmonies.
Rivers’ three stage guitars – his trusty Warmoth S-types ‘Mei’ and ‘Satsuki’, and his Gibson SG, ‘Courtney’

The complimentary differences between the pair’s guitar styles is clearly in evidence on Weezer’s latest album, Pacific Daydream. The record, which was released at the tail end of last year, has some of the most unusual guitar work seen during the band’s 24-year existence, with layered acoustic guitars, lo-fi blues-rock licks and retro slapback all in evidence in hitherto unseen quantities. It’s quite a departure from a sound that fans would associate with the band, but it speaks to the way the pair’s guitar relationship has developed over time.
When we caught up with the pair before their gig at Manchester’s 02 Apollo at the end of 2017, we were keen to pick the pair’s brains about the way they work together as guitar players, and also about the unique and iconic guitars they were strapping on for that evening’s show…
Wind In Our Sail
Despite Weezer having been active and touring for most of the last 20-odd years, they haven’t spent a lot of time in Europe in the last decade or so – aside from a quick two-date jaunt in 2016, before this tour they hadn’t done a significant string of dates in the British Isles since 2005’s Make Believe. But having done a proper run this time, the pair are clearly energised by the experience.
Most of Rivers’ guitars are covered in stickers given to him by fans

“I don’t think I’ve ever enjoyed myself so much in Europe,” exclaims Bell as we sit down to chat. “I feel so comfortable here – I wish we didn’t have to go, really!”
“We’re doing interviews and people tell us how long it’s been since we’ve been here and we’re surprised,” Rivers chimes in. “Time has flown by and we feel like we’ve been negligent in our duties as a touring rock band! We want to do more now.”
Despite having a new album under their belts, we’re surprised to hear that they’ve resisted the temptation to play too many new tracks in the ever-evolving setlist.
Rivers uses DiMarzio and Seymour Duncan pickups in his guitars

“We don’t do too many new songs – right now we’re just doing Happy Hour and Feels Like Summer,” Rivers explains. “Our last album [2016’s The White Album] is pretty new, too, so we’re doing California Kids, King Of The World and Thank God For Girls. There are some kids that know the words already, and that’s fun – but for the most part I think people are still trying to catch up!”
“Before the tour you think, ‘Oh yeah, this’ll be great! We’ve got all these new songs and we’ll do five new ones every night…’ but once you get out on the road it’s just like nothing matters except the joy of the audience – that’s all that matters to you. So everything changes to adapt to your audience – you just want them to have the best possible time.”
A Rivers runs through it: Cuomo has been using Kempers live for the last year or so
Fall Together
Watching the pair perform their fan-pleasing set, it’s clear that Brian and Weezer have clearly defined roles when it comes to the guitar side, but that doesn’t mean they necessarily agree on what that is all the time…
“We’re very complimentary,” Rivers explains. “I’m kinda like the backbone of the guitar sound – lots of downstroke powerchords, and I play very consistently through the song. Then Brian is like a total loose cannon – much more jagged and sloppy, playing from the hip-style.”
“A loose cannon? Interesting…” Brian chuckles. “Alright I’ll take that.”
Brian handles guitar and keys duties in Weezer
“His part generally don’t repeat much,” Rivers clarifies. “His second verse is different to the first and so on. It makes for a fun listen for me as we’re performing. Then when it comes time for the guitar solo, I take over and go full-on alpha-male guitar guy!”
“On the record I actually think I’m quite the opposite – I’m coming in with very defined parts,” Brian notes. “I’m a piano player first and foremost, so I could always read music, ever since I could read English – I learned to read music around the same age. A lot of musicians don’t read music, or they don’t want to learn to read music, but I never had that – so I decided that I’m proud of that and I’m going to use that knowledge. I love notating – I enjoy it, it’s almost like solving a puzzle.
Brian found his primary Explorer in Rivers’ basement and has used it ever since

If I come up with a part or hear a melody I use that process to help me come up with the idea – putting the notes to paper, I see the patterns. Whatever it is, you can look at it on the stave and maybe try to physically invert it and see what happens – that kind of thing can really work sometimes.”
My Best Friend
In addition to being one of the most interesting guitar players of his era, Rivers has spent most of his career playing some truly unique instruments. Go back to the band’s first video – the Spike Jonze-directed Undone (The Sweater Song) promo – in 1994 and you’ll see him playing a pale blue S-type guitar that’s most certainly not a faithful version of Leo’s classic design. “They never seem to work for me,” says Rivers of his aversion to stock Fender Strats. “They don’t have the power that I need.”
Brian’s backup guitar is surprisingly ideal for acoustic simulator work

Instead, Rivers got his guitar tech at the time to create an S-type for him that would suit his hair metal-worshipping guitar style. The original guitar pulled together a Sonic Blue Warmoth hardtail S-type body, 22-fret Warmoth neck with rosewood ’board, Sperzel locking tuners and a potent combo of a Seymour Duncan TB59 in the bridge and a DiMarzio Super 2 in the neck, and a Black Ice onboard overdrive unit taking the place of the tone control.
The resulting guitar would be Rivers’ ever-present companion on stage (gaining some crudely taped Van Halen stripes along the way) until it suffered a nasty blow on stage in 1997, leaving the body with a 10-inch crack. Blue had to be retired, and in its place several replacement Warmoth S-types were ordered, including a black one he used on their second self-titled long-player (The Green Album), and a blonde one that legend has it now contains the innards of the original Blue…
Brian keeps his Matchless Independence in an iso cab for live use