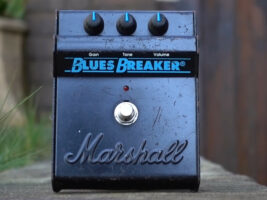 UPDATE (17 February): Marshall is not bringing the Blues Breaker back. A spokesperson for Marshall told Guitar.com: “As much as I love the idea I’m afraid it’s not official and isn’t true.” An edited version of the original story continues below.
A teaser has appeared online that seems to imply that Marshall Amplification could be reissuing its legendary Blues Breaker overdrive pedal.

It’s unclear where this image originated from. Marshall has confirmed to Guitar.com that the image is unofficial, and the Blues Breaker is not being reissued. Guitar.com has reached out to @luca.guitars for more information.
The story of the Blues Breaker goes all the way back to the 1960s. Following the use of an early Marshall combo amplifier by Eric Clapton on the seminal Blues Breakers album by John Mayall And The Bluesbreakers, the Blues Breaker name stuck to that style of amplifier. So much so that when in 1991 Marshall released a line of pedals that paid tribute to its old amplifiers, the one aping the drive sound of the JTM amplifiers was named the Blues Breaker.
The pedal itself wasn’t particularly well-known, however guitarist John Mayer popularised the pedal on his record Continuum. The pedal has since become the starting circuit topology for countless other overdrive pedals, such as the Analog Man King Of / Prince Of Tone, the JHS Morning Glory, the Wampler Pantheon, the Keeley 1962 and more.
The post Is Marshall reissuing the legendary black-box Blues Breaker? appeared first on Guitar.com | All Things Guitar.