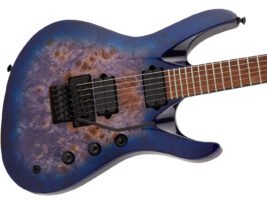 Jackson has prepared a sleek array of Pro Series signature electrics for Chris Broderick this year. These metal-focused guitars are equipped with modern features and arrive in an array of six- and seven-string variants.

Each guitar in the range has a mahogany body and an arched poplar burl top with a through-body maple neck, connected by a scarf joint. The necks also have graphite reinforcement for increased stability and sustain. Meanwhile, their bound laurel fingerboards feature 24 jumbo frets and have a 12-inch radius.
Electronics include a pair of DiMarzio Chris Broderick signature humbuckers in the neck and bridge positions, which are said to emphasise pick attacks and tight lows. These are routed to a three-way selector, as well as push-pull volume and tone controls; the latter two controls let you coil-split the pickups and engage or disengage the tone circuit, respectively.
Located near the bottom of the guitar is a mini-toggle kill switch that lets you pull off stutter effects on the fly.
The Pro Series Signature Chris Broderick Soloist comes in six- and seven-string versions. You’ll also get to choose between a hardtail model or one equipped with a Floyd Rose Special double-locking vibrato. They come in two colours: Gloss Black and Transparent Blue.
A six-string vibrato equipped variant (top) and a seven-string hardtail variant (below) / Images: Jackson Guitars
In total there are eight variants of the signature guitars. The six-string editions are priced between £890 to £1,150 ($1,000 to $1,200), while the seven-strings are offered at £979 up to £1,250 ($1,000 to $1,300).
The post Jackson’s new Pro Series Chris Broderick Soloist range comes in an array of six-, seven-string variants appeared first on Guitar.com | All Things Guitar.