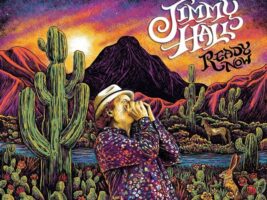 Ready Now could be seen as a major statement in a career full of highs dating back to Hall’s work with the legendary Southern Rock band Wet Willie.
Out of the eleven tracks, five (Jumpin’ For Joy, Risin’ Up, Holding On For Dear Love, A Long Goodbye, and Will You Still Be There) are co-written by Bonamassa, who’s also responsible for the guitar solos on those songs.
Meanwhile, co-producer Smith plays an exquisite guitar solo on the track Girl’s Got Sugar.
Fans can also look forward to special guest performances from legendary guitarists Warren Haynes and Jared James Nichols: Haynes plays a slide guitar solo on the title track Ready Now, while Nichols plays a guitar solo on Without Your Love.
Backed by a crack band that includes Bonamassa, Smith, legendary keyboardist Reese Wynans, Bassist Michael Rhodes and drummer Greg Morrow, Hall is free to give his all to the songs and performances. None more so than on the track Dream Release written with his son Ryan Hall about his lifetime friendship with Gregg Allman.
The album’s first single and opening track Jumpin’ For Joy is now out. Check out the song below.

Set to be released on 16 September, Ready Now is available to pre-order here.
Here is the full tracklist:

Jumpin’ For Joy
Risin’ Up
Dream Release
Girl’s Got Sugar feat. Josh Smith
Ready Now feat. Warren Haynes
Holding On For Dear Love
A Long Goodbye feat. Joe Bonamassa
Will You Still Be Here
Without Your Love feat. Jared James Nichols
Love For It
Eyes In The Back Of Your Head