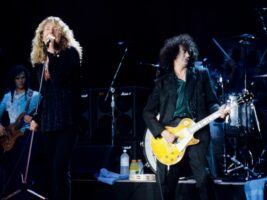 Jimmy Page has marked his return to Bron-Yr-Aur, the remote Welsh Cottage where he stayed with Robert Plant in 1970, writing many songs that appeared on Led Zepplin’s third and fourth albums, after more that 50 years.

In a post to Instagram, the guitarist posed alongside the cottage’s current owners, Scott and Ruth Roe, and their daughter Chenoa.
According to the post on Scott Roe’s Instagram account, the photograph itself was taken during a visit to the cottage from Page and his daughter Zofia.
“It was a beautiful thing to spend time with @jimmypage and his daughter @zofiapage at #bronyraur. What a lovely thing to welcome Jimmy back after more than half a century !!! The sun shone for the visit and hope there will be many more. There is hope yet that our 54th and final Bron Yr Aur band member might just be the greatest living guitarist,” Scott Roe wrote on Instagram.
You can see the post below:

A post shared by Scott Boohai Aka The psychedelic cowboy (@scott_boohai)

In other Jimmy Page news, the guitarist revealed last month that a Led Zeppelin hologram show was in the works before it was scrapped after band members couldn’t agree.
Page was speaking onstage at the Hay Festival in Wales on 2 June when he made the comments, according to reporting by The Guardian. Speaking on ABBA’s successful Voyage hologram show, Page said that Led Zeppelin had been asked to do “that sort of thing” long before ABBA’s hologram show was announced.
Unfortunately, discussions with surviving band members Robert Plant and John Paul Jones were unfruitful and the trio could not agree on the show so “it didn’t really get moving”, Page says.
The post Jimmy Page visits to Bron-Yr-Aur cottage, countryside home to Led Zeppelin III and IV’s writing sessions appeared first on Guitar.com | All Things Guitar.