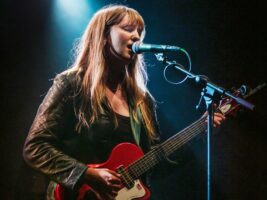 Madison Cunningham has unveiled her newest single in anticipation of the 9 September release of her next LP, Revealer.

Leading on from two other single releases seen earlier this summer, Anywhere and Hospital, the newest release In From Japan offers fans the latest sneak peek from Cunningham’s upcoming record.
Speaking about the newest song, Cunningham explains that “I think ultimately this song is about being frustrated with the idea of purpose, and burdened by the sweeping questions that come with ‘No one’s holding you back now’ and all of the negative space that is left to make mistakes in.
“It very much reflected how I was feeling at the time – only able to speak in metaphors and having a hard time expressing what was so paralyzed in myself.”
You can listen to a snippet of the song below:

Cunningham will also be going on tour with the new record across the United States and Europe from September until December 2022.
In addition to the single release, the guitarist also unveiled a live performance of her single Hospital in addition to the previously released music video, which has reached the #1 Most Added at AAA and Non-Comm radio.
These new releases follow up from Cunningham’s EP Wednesday, which was nominated for Best Folk Album at the 2022 Grammys. Previously, her debut album Who Are You Now, was nominated for Best Americana Album at the 2020 Grammy Awards.
In more Madison Cunningham news, she has hinted on Instagram that she will be featured on NPRs iconic Tiny Desk series, which will premier on YouTube in August.
For more information about Revealer, and the upcoming tour, you can visit MadisonCunningham.com.
The post Madison Cunningham offers a sneak peek to her highly-awaited LP Revealer appeared first on Guitar.com | All Things Guitar.