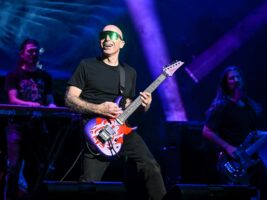 Joe Satriani on being asked to play for the Van Halen tribute concert: “You can’t replace Eddie Van Halen”

Joe Satriani has opened up about what it was like being asked to play the guitar at the Van Halen tribute concert, and why it all went wrong.

READ MORE: St. Vincent’s new podcast will school you on the history of rock music

Speaking to the Out of the Box podcast, Satriani reflected on being asked to play the guitar at the Van Halen tribute event, which was supposed to happen in New York City last August at the We Love NYC: The Homecoming Concert event.
“I get a call out of the blue from Alex Van Halen, who I’d never met until then, and he poses the unimaginable to me, which is to go out with a Van Halen tour, playing guitar,” says the guitarist. “And as I’ve told other people, I heard my voice saying, ‘Yeah, I’ll do that,’ before my brain really thought, ‘Don’t say yes. That’s an impossible thing to do; you can’t replace Eddie Van Halen. Nobody can.’”
“Many times I’ve told Alex, ‘Are you sure? Me?’ ‘Cause I don’t perform like Eddie. I’m just a superfan. And I can certainly play the stuff,” Satriani explains. “But Eddie was such an original — just the way he ran around on stage and sang and played. It’s amazing.”
This comes a couple months after Satriani explained to Ultimate Classic Rock that he wants no role in a Van Halen tribute, and admitted that he believes Wolfgang Van Halen is the only person who should decide whether an event takes place, even though he was asked personally by both Alex Van Halen, as well as David Lee Roth.
There is no current plans for the Van Halen tribute to take place, but one thing is for sure,  Joe Satriani will not be a part of it.
The post Joe Satriani on being asked to play for the Van Halen tribute concert: “You can’t replace Eddie Van Halen” appeared first on Guitar.com | All Things Guitar.