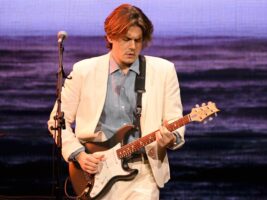 John Mayer on his favourite Sob Rock song and his advice for songwriters: “If you don’t like it, it’s just that it exists a little bit beyond your own tastes for that moment”

It’s been a little over seven months since John Mayer released his 80s-flavoured Sob Rock and now the musician has revealed which of its tracks is his favourite.

READ MORE: The Big Review: PRS SE Silver Sky, one of the world’s most popular guitars gets a budget-friendly variation

“It’s Wild Blue for me, baby,” Mayer told SiriusXM. “I just put it on and I can’t believe it’s mine. Artists aren’t really allowed to say that but it is true. There are some songs you do with your left hand and you look back and it and you go, ‘that’s wild.’”
Elsewhere in the conversation, the musician – who’s put out eight studio albums now, starting with 2001’s Room For Squares – dropped some words of wisdom for fellow songwriters: “If you don’t like [what you’ve written], it’s just that it exists a little bit beyond your own tastes for that moment.”
“Why would you do what you normally want to do anymore?” Mayer said. “What’s normal anymore? I’m now at the point where I’m [asking], why do I even have to like what I’m writing? What if I can write things that I don’t even like at the moment?”
“That’s what happens as a writer; you write something and you go, I bet this isn’t any good, but your tastes catch up to it,” he continued. “It’s a very complex, kind of twisted thought but why does liking my idea stop me from writing the idea? What you like and don’t like right now is not essential.”

Mayer also revealed that he’s been writing a song about the late comedian Bob Saget, whom he was friends with. And his approach to writing that tune has been to let ideas collect slowly, rather than actively pursuing them.
“I have a song – sometimes songwriters have a song they go real slow on when they write it and it’s their pet project,” Mayer said. ”And they go through their day and it’s like a little empty apple basket and they pick different things; maybe I’ll put that in this song.
So I have this song that’s my friend, it’s sort of my little collection plate for ideas and thoughts I have about Bob and I put it on the plate and I keep working on the song. I work on it in the car if I’m driving, I just know how the song goes.”

The post John Mayer on his favourite Sob Rock song and his advice for songwriters: “If you don’t like it, it’s just that it exists a little bit beyond your own tastes for that moment” appeared first on Guitar.com | All Things Guitar.