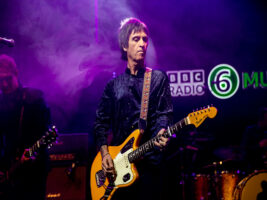 Following the news of his latest solo record, Fever Dreams Pts 1 – 4, the ex-guitarist for The Smiths has taken to social media to share an image of a new, potentially limited-edition run of his signature model: the 1965 Fender Jaguar.

READ MORE: Legends, Presidents And Back To The Future: Witnesses And Exhibits Named Ahead Of Gibson Vs Dean Trial

Shared on Instagram yesterday (May 10), Johnny Marr posted a photo of himself with his latest axe, the Fender Jaguar in a colour named ‘Fever Dreams Yellow’ which has accompanied him throughout his current tour with Blondie.
Yet, it was the image’s caption that stole the limelight, with rumours now circulating that the Jaguar will soon be released as another limited run of his ever-popular Fender range, with Marr writing that there will be “news coming soon”.
This wouldn’t be the first time that the guitarist has released a limited edition version of his original 1965 Jaguar signature: currently, the model is being offered in Olympic White and Metallic KO finishes. Limited runs of both a Sherwood Green and Lake Placid Blue have also been previously seen, all of which featuring the musician’s signature short 24” scale and bolt-on maple neck, profiled to match his original model.

While Marr has all but confirmed the upcoming Fever Dreams edition, the images suggest that the upcoming release will come featuring Bareknuckle pickups and a unique four-position selector switch that replaces the standard Jaguar selector switch. Here, the embellishment allows for more versatility, as pickups can be selected individually, in parallel or in series – allowing for a warmer-sounding hum-cancelling tone.
In addition, the model seems to boast upper-horn slide switches; universal bright and pickup-switch position four bright to capture Marr’s distinctive sound, whilst the taller whammy bar and Jaguar bridge with Mustang saddles (which come with nylon post inserts) provide added stability and ease for each player.
Further information on the Fever Dreams Yellow edition is predicted to be announced later this summer, most likely during the NAMM 2022 Show next month.
Further information on the Johnny Marr Signatures can be found on Fender.
Marr’s new album, Fever Dreams Pts 1-4 is out now via BMG.
The post Johnny Marr teases a potential new Fender Signature appeared first on Guitar.com | All Things Guitar.