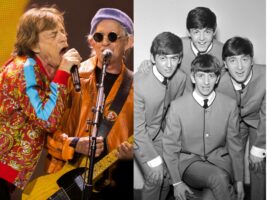 Keith Richards on how The Rolling Stones were “envious” of The Beatles during their early days: “They were doing what we wanted”

It has recently been revealed that The Rolling Stones were initially “envious” of The Beatles during the early days of their career. Speaking about how Keith Richards in particular was infatuated by the band, the members discuss how they were inspired to sound more like the Liverpool legends shortly after they first formed.

Speaking as part of the second episode of the newly-launched BBC documentary, My Life As A Rolling Stone, both Keith Richards and Mick Jagger have admitted to feeling jealous of the immense success received by The Beatles during the early 1960s.
Keith Richards, who was particularly infatuated by the band, states that The Rolling Stones were predominantly playing covers at the time, and felt pressure to try and create their own songs after seeing the overwhelming acclaim given to the Liverpool-based pop stars.
“We were working the clubs in London and The Beatles just came out and had a hit, Love Me Do… And we said, ‘Oh man, what a great record’” Richards reflects. “Our job [at the time] was to be like the premier rhythm and blues band in London and we managed that! But we had no idea of progressing beyond that stage [until then].”
The band’s frontman Mick Jagger also recalls how Keith Richards first became “obsessed” with The Beatles and claims that the band reinvented the music scene and changed the expectations for new artists.
“The Beatles suddenly explode and there you are going: ‘Oh, yeah, but we’re a blues band! The Beatles changed this whole thing,” he claims. “Keith, he’d play The Beatles all the time [and] it’d drive me absolutely batty! Why he was playing The Beatles wasn’t because he didn’t want to listen to anything else; [it was because] Keith wanted to write these pop songs. We [were] undeniably the blues band, but we knew we had to be a pop band.”
The guitarist continues to elaborate on why he felt so personally impacted by The Beatles’ success, stating that it was because of the band’s ability to achieve success by writing their own records, unlike The Rolling Stones, who were releasing mostly covers at the time.
“We were just envious, too, man. I mean, they’re doing what we wanted – they got it!” he insists. “They could make records. The Holy Grail was to make records, to be able to get into a studio. […] You’d think it was a gold mine, which in a way it was, y’know what I mean? You’d think you were invading Fort Knox just to make a record.”
This discussion of The Beatles comes in light of comments made by the members during the first episode of the series. Discussing the controversial image they were given throughout their career, both Jagger and Richards elaborated on how, behind the scenes, The Beatles were behaving in the same way as they were – stating that their more respectable image was formulated to make them more appealing to the public.
Watch all episodes of My Life As A Rolling Stone now on BBC iPlayer.
The post Keith Richards on how The Rolling Stones were “envious” of The Beatles during their early days: “They were doing what we wanted” appeared first on Guitar.com | All Things Guitar.