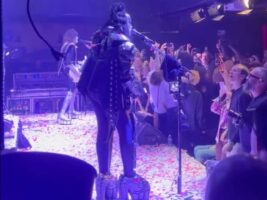 KISS reportedly played a private show for less than 100 people

Glam rock heavyweights KISS took part in an incredibly intimate show last weekend – performing for a crowd of no more than one hundred people, a far cry from their usual fare.

READ MORE: Robert Fripp Asks “Why Should I Give A Fuck” About King Crimson Fans Upset By Sunday Lunch

Although having packed arenas for approximately half a century now, it appears that rock icons Kiss are still willing to make time for much more intimate live performances. This comes as the band have reportedly played a private show in Texas for fewer than one hundred people.
The event, which undoubtedly will have cost a small fortune to organise, was first reported by writer Michael Cavacini on his website. Here, the post states that the event was a ‘secret show’ which took place for Philip Morris International, a multi-national tobacco corporation.
Said to have been held at Vulcan Gas Company, a small club in Downtown Austin, the event was not admissible for the general public, although extensive footage of the performance has been uploaded to Cavacini’s website for those wanting to see the band in action.
The band’s current lineup, which includes original members Paul Stanley and Gene Simmons, alongside guitarist Tommy Thayer and drummer Eric Singer, is currently out on the road as part of the band’s End Of The Road farewell tour.
Although due to wrap up the tour in early 2023, Simmons has previously insinuated that the band will likely continue to perform in “other ways”, even after the final performance of the farewell tour.
Speaking with the Let There Be Talk podcast in August, the bassist explained how he expects the glam band to evolve over time and likely take on other forms with new members – something he describes as being similar to the Blue Man Group.
Find some footage of Kiss’ performance at the Vulcan Gas Company below.

About last night…. KISS at Vulcan Gas Company….. my biggest accomplishment to date!!!!
Posted by Nick Franceschini on Sunday, October 23, 2022

The post KISS reportedly played a private show for less than 100 people appeared first on Guitar.com | All Things Guitar.