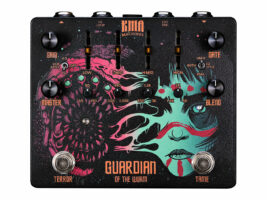 KMA Machines introduces the Guardian Of The Wurm, a gated HM-2 style distortion

Summer NAMM 2021: KMA Machines has unveiled an updated version of its HM-2-inspired Wurm distortion, entitled Guardian Of The Wurm. The updated version adds a noise gate, a new EQ section and more.

The pedal’s active EQ stack builds on the core of a HM-2-style two band EQ. Two more bands have been added, and all four bands are now parametric, with a large sweep across their respective ranges.
The pedal’s EQ has three sound modes: HM-II, KMA and a Both. The HM-II mode is more focused on the classic chainsaw sound of bands like Entombed, while the KMA mode has a more modern character, with a wider response and more balanced EQ. The Both position stacks these two modes into each other.
The distortion also has three clipping modes. There’s Silicon (Si) for the original chainsaw’s compression, Asymmetric (A-S) for more headroom and grit. The OFF position lifts the sound of the Diodes for a slight compression much more clarity, which KMA notes is “perfect for baritone guitars or bass.” Also good for retaining clarity is the clean blend knob, which remains from the original Wurm.
The noise gate function uses a Blackmer VCA, and has a simple threshold control. An internal dipswitch changes whether the trigger point for the gate is pre- or post-distortion, or pre-noise gate. This last function makes use of the new TRS effects loop, which allows you to use The Guardian Of The Wurm’s gate with any of your other pedals. There’s also an external trigger jack for some more experimental, side-chained gate effects.
The gate (Tame) and distortion (Terror) can be switched independently with their own footswitches. But to activate both at the same time, you can hold down both footswitches to toggle the pedal’s activation mode. Once switched, both sides of the pedal will be activated with the Terror footswitch.
Hear the pedal in action below.