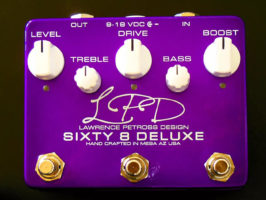 It claims to capture the sound of a vintage Plexi head.

Boutique pedal brand Lawrence Petross Design has released the Sixty 8 Deluxe Overdrive. The more spec’ed-out sibling to the brand’s original Sixty 8 Drive, this snazzy purple device is capable of delivering a transparent overdrive inspired by a ’68 Plexi amp.
The pedal’s tube-like overdrive spans from a light, edge-of-break-up tone to a more commanding distortion. Unlike the Sixty 8 Drive, however, this Deluxe edition has an additional gain stage for an even wider tonal palette.
Tweak to taste with “Level”, “Drive”, and “Boost” knobs, as well as a two-band EQ. It also comes with a set of footswitches for convenience: The middle switch selects between the two channels, while the rightmost switch unleashes a gain boost.
Retails for $279.99. More information at lawrencepetrossdesign.com.The post Lawrence Petross Design announces the Sixty 8 Deluxe Overdrive appeared first on The Guitar Magazine.